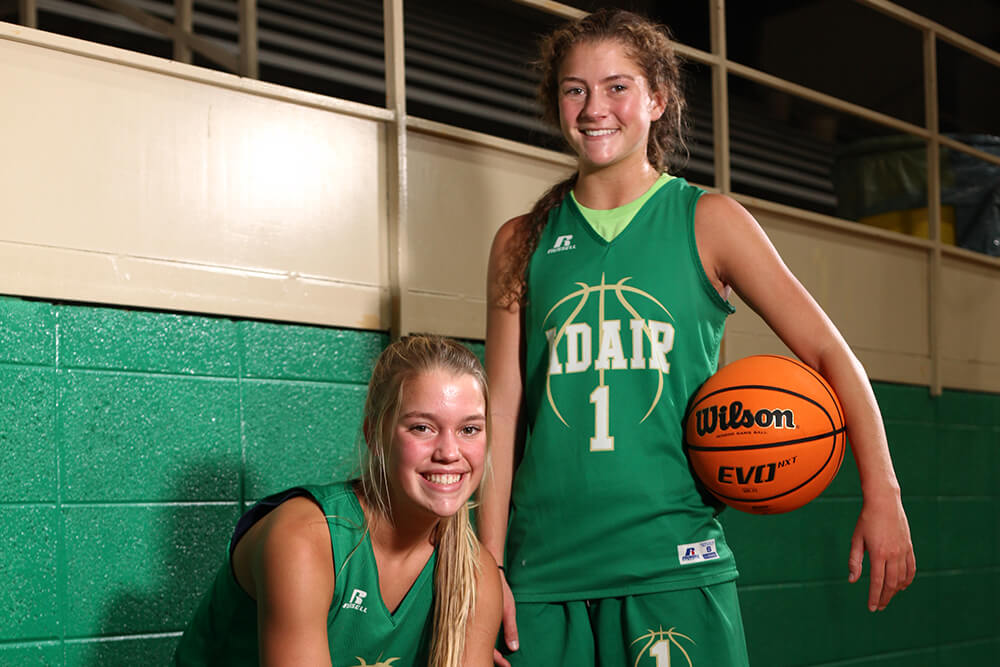 Adair High School seniors and twin sisters, Sophie and Mia Bagby, are poised to give the Warriors a chance at repeating on the hardwood as Class 3A state champs.

As twins, Sophie and Mia Bagby do almost everything together, including playing on the Adair High School basketball squad. So it was difficult for both of them last year when Sophie missed most of the season with a knee injury.

But with a lot of encouragement in her rehab from Mia, Sophie returned just in time for the Class 3A state tournament and helped spark the Warriors to the state championship.

Now, as seniors, the fraternal twins, who, as you might expect, enjoy a special kind of chemistry on the court, are ready for one last high school basketball season together.

After competing during track and field season last spring (but admittedly slower than usual), Sophie had a bit of a setback with her knee late in the summer, which prompted her to undergo a minor arthroscopic procedure in mid-September to remove loose cartilage. But after more rehab, she should be back and ready to go again by the time the 2019-20 season gets underway in early December.

Dealing with the initial injury last year was difficult for both sisters.

Sophie, a shooting guard, tore the ACL in her knee Aug. 23, 2018, and underwent reconstructive surgery on Sept. 4 (of course, she remembers the exact dates). The usual recovery time for ACL surgery is listed as about six to nine months, so the fact that she was able to get back and play in early March (just about six months after the operation) is impressive.

“It was super hard, because basketball is my favorite sport, and it’s hard not being out there and having to sit out and watch everybody play,” Sophie says. “But I also knew that it was part of God’s plan and that he had something bigger waiting at the end. So I had to trust the process.”

Mia, the Warriors’ starting point guard, had a tough time taking the court without her twin in the lineup.

“It was challenging,” Mia says. “She was a strong figure out on the court, and she had a good presence. Without her, it was crazy and hectic. I hated it.”

As the season went on and the games remaining dwindled, the question as to whether Sophie would get back in time, and if she even should attempt it, weighed on everyone’s mind.

“It was kind of scary because I didn’t know for sure if I should come back and risk it early,” Sophie says. “But I also had a great surgeon and good physical therapists at Summit Physical Therapy in Claremore. They helped me through the process and got me to where I needed to be.”

By all accounts, Mia played a crucial role in Sophie’s rehab process, helping encourage her and keep her motivated to work hard.

“She had a huge role in it,” Sophie says. “I was always super discouraged and would feel like I wasn’t doing enough, or I wasn’t working fast enough, but she assured me that I was. She helped keep me going and helped me to stay strong.”

“I tried my best,” Mia says. “We all wanted her back so bad. I needed her back. I thought she handled it the best I’ve ever seen. She did all of her exercises, did everything everyone told her to do, listened to her therapist, her doctor; she was determined to get back, and she made it happen.”

Sophie finally retook the floor in the Area playoffs, playing somewhat sparingly in two games before the state tournament started. Even though she wasn’t 100%, Sophie provided a big spark. In the state final, Adair trailed by 12 points in the third quarter, but Sophie’s 3-pointer helped jump-start the comeback. Adair defeated Christian Heritage by 12 for the title.

“She did all she could do,” Adair coach Scott Winfield says of Sophie. “She made three 3-pointers in every game of the state tournament. I watched her minutes and played her four minutes here and there because she wasn’t in great shape. Just having her presence out there, her nine points per game while we were in the state tournament, helped us tremendously.”

“I think [her return] had a lot to do with [us winning],” Mia says. “We had that leadership that we needed, and that calmed us down and helped us remember who we were.”

The fact that they were able to win it all after what Sophie endured made the victory sweeter for the twins.

“The best feeling in the world,” Sophie says. “It’s been our biggest dream forever and to finally do it together, and after coming back from that injury, it’s like 10 times better.”

The twins have been playing together almost their whole lives and have developed practically uncanny chemistry on the court.

“We just know each other so well,” Sophie says. “We’ve been playing together since first grade, so she knows how I play, and I know how she plays. It’s easy to read each other and what we’re going to do, and it’s easy to pick her up when she’s mad or when she’s slacking or when I’m slacking. It’s kind of a different connection we have out there.”

Winfield appreciates how well they work together, on and off the court.

“They kind of know where each other is at all the time,” Winfield says. “They’re super kids, and great in the classroom. I couldn’t ask for better players.”

The twins, who both run cross-country and track, as well as participate in the FCA (Fellowship of Christian Athletes), are still trying to figure out their plans for 2020. For now, they realize the challenge to repeat as state champions will be difficult, but they are ready for it.

“I think it motivates us even more, because we already got a glimpse of that feeling of winning the state championship, and we want it again,” Mia said. “We want to feel that again so badly; it’s motivating all of us to push ourselves to play our best.”

Scream Machines
Riders piloting indoor motorcycles on steroids will be looking to avoid coming off like “squids” or getting “cased” as the dirt devils flip, jump and push for a holeshot, points and cash. Brraaap!