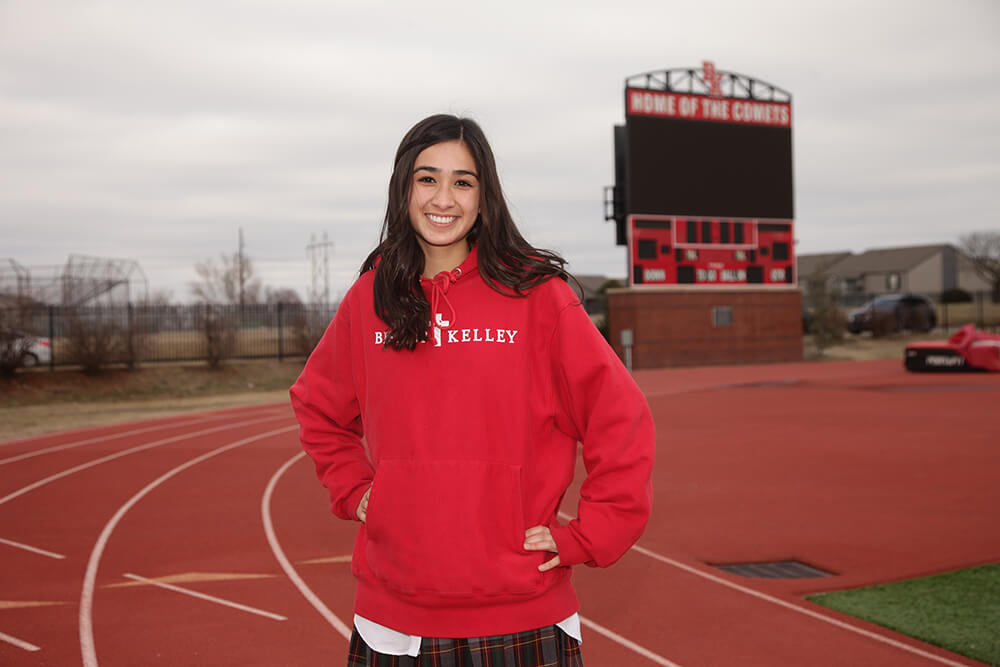 Now that she is healthy again, Bishop Kelley distance runner Ella Eureste is looking forward to the opportunity to show what she can do on the big stage and away from cross-country.

Ella Eureste has some unfinished business to attend to during the upcoming track and field season.

The Bishop Kelley sophomore endured a problematic freshman season, suffering from illness and injury, and was unable to compete at her best during the Class 5A state tournament last spring. Now that she is healthy again, the exceptional distance runner is looking forward to the opportunity to show what she can do on the big stage.

“Last season, I got the flu, and I got pneumonia, and then something in my back tweaked, which set me back, so I wasn’t able to fully run my best last season,” says Eureste, who ended up finishing 14th in the 800-meter dash and fourth in 1,600 meters at last year’s state meet as a freshman. “I think it was mid-season, and breathing was getting hard, and my body was aching all the time. I lost a lot of my fitness mid-season.”

That she still managed to fare so well in the 1,600 under such circumstances demonstrates just how much potential she has. She also won the Class 5A individual state championship in cross-country in both her freshman year and again this season in November 2019, completing the 5K course in 19:15, winning by 10 seconds, and helping the Comets win the team title for the second straight year.

Eureste indicates that she excels in the longer distances, so this track season will focus on the 3,200-meter race, as well as participating in the 4x800 relay.

As successful as she has been in cross-country, Eureste points out that she prefers the predictability of track, because every location has the same parameters, as opposed to different cross-country courses that each have unique paths and terrain to navigate.

“For track, I think the main thing is, you know your exact pace,” she says. “Every lap, you can get your split, and you can be like, ‘OK, I am on this pace. I need to go faster or go slower.’ It’s more precise, while cross-country is more about placing rather than times because there are hills, there are conditions, and there’s a lot of variables.”

“My friends were like, ‘You should join the cross-country team,’ so I joined in middle school and I liked it,” says Eureste, who also played soccer through eighth grade. “Instead of doing swimming that summer, I decided I wanted to run instead. So I joined a track club, Personal Best Athletics, trained the whole summer, and went to the Junior Olympics with them. It’s just something that I fell in love with.”

To her, part of the appeal of running is the chance to push herself to new limits, as well as the camaraderie amongst the team.

“It’s hard because a lot of people don’t like to run,” acknowledges Eureste, who gave up swimming competitively but still does it sometimes for cross-training purposes. “The hard workouts, they kind of test you, but I like the rush of pushing your body as far as it can go.”

The mental aspect of running, forcing herself to keep going no matter how unpleasant it feels, is something that Eureste took a while to figure out, but she feels like she’s got it under control now.

“It is a mental thing. I’ve gotten to the point where I have it down,” she says. “It takes a few years to get used to being comfortable with being uncomfortable, in those long runs where you have to go faster, or where you have to push yourself. I clear my mind and focus on running, and I don’t overthink anything. I try not to get overwhelmed with how fast I try to run and stay clean and have good form.”

Her powerful mental game is a major component of what makes her so unique, according to Bishop Kelley track coach Lane Frailey, as well as her overall character.

“The thing that sets her apart, I think, is her competitiveness,” Frailey says. “She does not like to lose. And for a sophomore, she’s a very mature girl. Her priorities are straight. She’s also a good teammate.”

That part of her personality extends off the track, too, as she excels in the classroom, as well as several other extra-curricular endeavors. In addition to serving on the student council and the sophomore class student board, Eureste is a member of the FCA (Fellowship of Christian Athletes) and a board member for Little Light House, a group that mentors little kids. And she is also part of the exclusive Brother Bernadine Scholars program at Bishop Kelley, which only the very top students can get into.

“You have to take a certain amount of honors classes,” she says. “And you have to do a research paper sophomore year, and then you have a capstone project your senior year.”

“To be in the Brother Bernadine program, you’ve got to be in the upper level,” Frailey confirmed. “It is a big deal around here. Brother Bernadine is one of the founders of the school many years ago, and there’s an elite group of scholars that is named after him, so you have to be up at the very top to get into it. You’ve got to do a lot of things.”

Eureste is very busy, but just like she’s gradually controlled the mental aspect of running, she has adapted to her hectic schedule and manages her time well enough to get all her schoolwork completed.

“I’ve got a lot going on, and I like having things to do,” she says. “It’s taught me how to work, how to be efficient, and how sometimes to stay up late and get things done.”