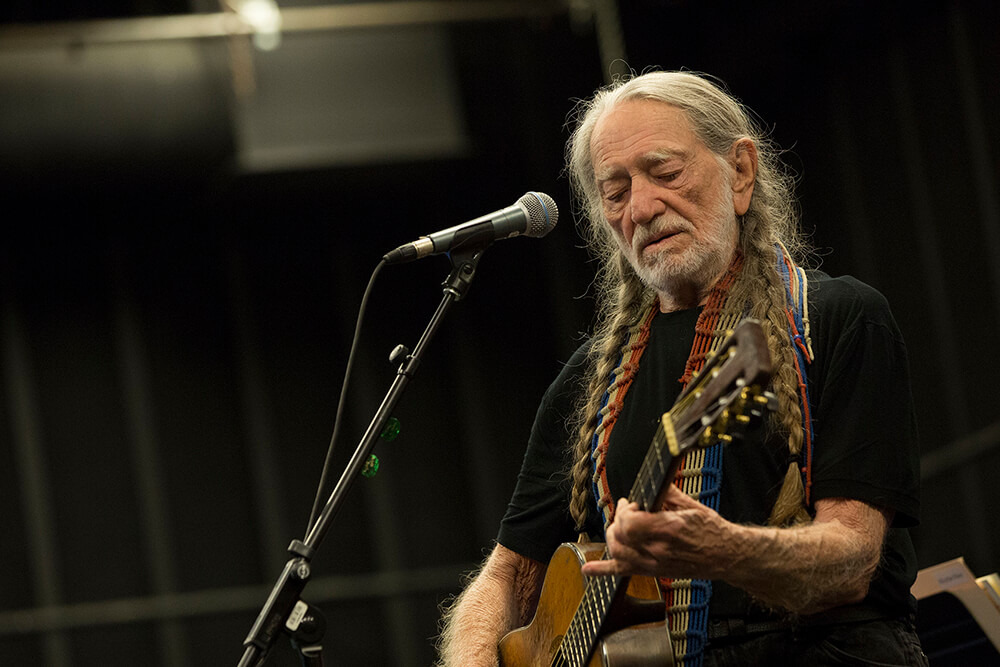 Despite his easygoing image, Willie Nelson might be the hardest-working man in country music. And at nearly 90, he is as relevant as ever and enjoying the elder-statesman phase of his career.

Willie Nelson retired in 1972 and moved to Austin, Texas, to enjoy his life of leisure. He was 39 years old. Fortunately for country music, his retirement didn’t last long. At the 2020 Grammy Awards, Nelson won his latest Grammy for Ride Me Back Home.

Born during the heart of the Great Depression, Nelson was raised by his grandparents. His talent for songwriting bloomed early, writing his first song at 7 years old. He wrote Faron Young’s 1961 hit “Hello, Walls,” Roy Orbison’s 1963 hit “Pretty Paper,” and Patsy Cline’s eternal “Crazy” in 1962.

Nelson settled into Nashville in 1960 and began recording albums, starting with …And Then I Wrote in 1962. Chafing under the thumb of the conservative Nashville sound and enjoying the fruits of his success, Nelson settled in Austin. His choice of retirement spots enjoyed a vibrant music scene and an enthusiastic hippie scene. Energized, he came out of retirement and claimed the outlaw country style as his own.

His acclaimed album, Red Headed Stranger (1975), made it clear that Nelson was back. And he hasn’t stopped since.

He’s lit up the big screen in over 30 movies, written nine books, and is known for his activism and philanthropy. He’s recorded 69 solo albums; won multiple Grammy Awards for Best Male Country Vocal Performance, Best Country Performance by Duo or Group with Vocals, and Best Country Song; earned a Legend Award; accepted a Lifetime Achievement Award; and more. The American Country Music Awards have honored him, as has the Country Music Association, the American Music Awards, Rolling Stone, and The Library of Congress.

The plight of the American farmer inspired Nelson to start Farm Aid in 1985 with Neil Young and John Mellencamp.

One of the first things Nelson did when he came out of his short-lived retirement was to bring a harmonica player into his band. Mickey Raphael has been playing with Nelson ever since. Raphael spoke with Preview 918 about all things Nelson before their March 15 appearance at River Spirit Casino Resort’s Paradise Cove.

Q. How long have you been with Willie Nelson?
A. Since 1973. He was almost 40 at that time, so he had a career, and he was a successful songwriter in Nashville. This was when he left Nashville and moved back to Texas. His career blossomed after that.

Q. What have you learned from him?
A. Musically, the biggest takeaway I’ve learned is to listen. When you’re playing in a band like this with a singer/songwriter, there’s a give and take. When we’re playing the songs, there’s an unspoken communication between the musicians: when to play, when to come in and out, and when to not play, which is probably the most important thing that we’ve got going. Because the voice and the lyrics are the most important thing to take into consideration, you want to complement the singer musically.

Q. Talk to us about the use of the harmonica in country music.
A. It’s not used that much in country music. There were a couple of Charlie McCoy songs coming out of Nashville in the late ‘60s and ‘70s. But the steel guitar and fiddle were more prevalent in the songs. I mean, there’s really nobody traveling with just a harmonica player as a supplement. I think I’m the only one doing that. Waylon [Jennings] had Donnie Brooks playing with him. With Willie, his steel guitar player had left the band, and Willie was not going to replace him. I just happened on the scene with Willie at that time, so he brought me in.

Q. Is it hard to play the harmonica?
A. Yeah, it’s a niche instrument. I mean, everybody can play a few notes on a harmonica, and you can fake it well. There are guitar players who might double on harmonica, but there’s just a handful of harmonica soloists.

Q. How much does Nelson tour?
A. We did about 90 cities last year. It’s about two weeks out of the month. We go out for two weeks and play maybe eight or nine dates.

Q. Nelson is known for his devotion to Farm Aid. Tell us about that.
A. We do concerts for it every year. I have my charities, as well.

Q. What are you involved in?
A. I do this Musicians on Call thing where you’re in town, and you go to a hospital and play. You go from room to room and, when they’re accepting, you play a song or two for the patients.

Q. How do you, as a band, go about picking out a playlist with such a long career of great music to choose from?
A. It’s all spontaneous. There’s no setlist; it’s all stream of consciousness. Willie kicks off every song, so it’s not like we have to know an intro to a song. I mean, it follows a certain pattern, there’s a certain group of songs he picks from, but he throws in new songs, or an old one we haven’t played in a while.