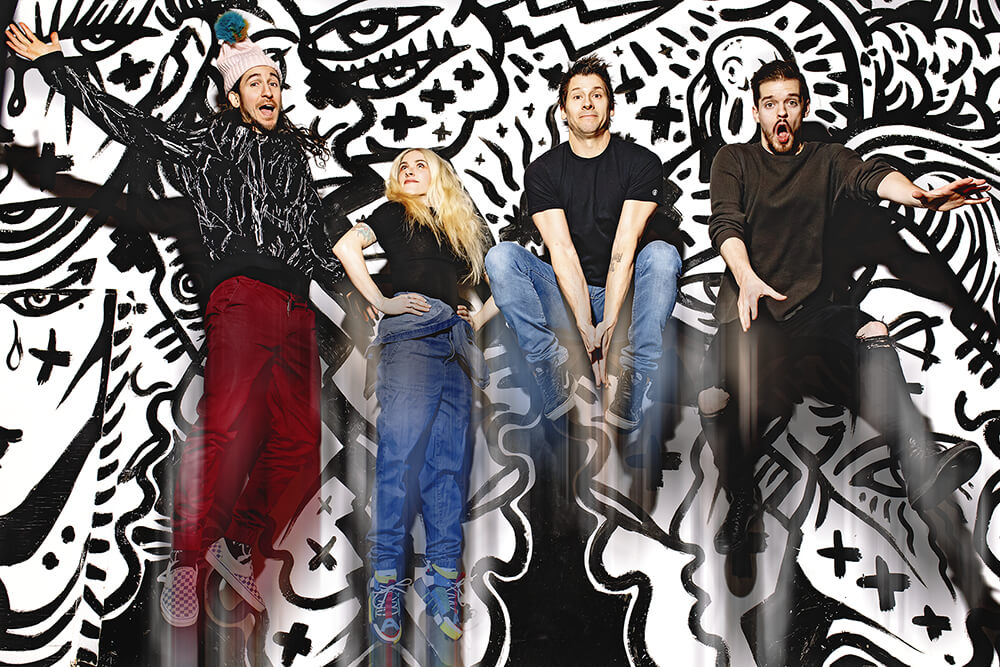 Q&A: Walk Off the Earth

A Canadian four-piece band, Walk Off the Earth, may have found fame with covers and YouTube exposure, but the group also produces plenty of catchy original tunes.

For those not familiar, Walk Off the Earth formed in 2006 and started out as a college band that mixed original and cover tunes with a sense of humor as the group developed. In early 2012, the band gained widespread notoriety when it posted a live cover of Gotye’s “Somebody That I Used to Know” on YouTube and the video went viral, gathering 175 million views in four months. After receiving positive reviews from Gotye and co-writer Kimbra, the band released a video of all five members playing the tune simultaneously on one guitar, which led to the band’s appearance on Ellen DeGeneres and a record contract with Columbia Records.

By the time the band’s debut album was released in 2013, the group had also done a variety of covers by Magic!, Adele, LMFAO, Maroon 5, and even Taylor Swift’s “I Knew You Were Trouble,” cementing the group’s crossover appeal and party band reputation.

After Rolling Stone streamed the band’s debut, R.E.V.O., online, the group set out on a major North American and European tour. In the years since, Walk Off the Earth has toured internationally, landed two albums in the Top 10 in Canada, scored a gold single, and won a Juno Award (the Canadian equivalent of the Grammy) in 2016 for Group of the Year.

The band sets out on a fresh international tour this year, with a new album on the way. Founding member Gianni “Luminati” Nicassio took time to catch up with Preview 918 before the band arrives in Tulsa at the Skyline Event Center April 26.

Q. How essential do you feel social media and streaming media are for introducing and breaking new artists now?
A. We feel that social media is everything right now in regards to building a fan base. That being said, it also makes it that much harder to stand out because so many talented musicians are releasing content online. You need social media skills but you also need great content.

Q. What have you found to be the advantages to going the indie route?
A. We don’t regret our experience under a major label as it taught us a lot about that side of the industry, although we are extremely happy to be out of the deal. As an independent operation, we are able to release much more music and we have the freedom to release music in more unconventional ways. We still dabble with major labels for some of our original single releases, as it takes a lot of money to release and promote original music. Licensing the songs to majors is a good way to get your music worked to radio without breaking your bank account.

Q. You are primarily known as an upbeat, feel-good type band with an acute pop sensibility.
A. The vibes come naturally for us as that’s who we are. That being said, when we started this band we had a big college fan base, and we had an edgy comedic side to the band that we enjoyed portraying. Over the years, our music and videos started drawing a lot of attention from younger fans and families, so we’ve found ourselves having to cut back a bit on the college humor. It’s all good, though, as we all have families now, so maybe it was time for us to grow up a bit. Just a bit.

Q. What are you looking forward to most with this tour, and what makes the experience most enjoyable for you?
A. The hour and 20 minutes onstage singing at the top of our lungs with 2,000 “WOTE-lings” is something that will never get old and something we’ll never take for granted. It’s always such a memorable experience. Each show has something different and special about it.

Q. How has the passing of bandmate Mike “Beard Guy” Taylor this past December affected the chemistry and vibe of the band?
A. Of course it’s changed our chemistry. He was such a presence and he was a massive part of our live show. It was a really hard decision to continue the tour without him. We knew that Beard Guy loved Walk Off the Earth and our fans so much that he would be disappointed if we didn’t carry on. We locked ourselves in the rehearsal space for a month and came up with a powerful show that brings the spirit of him with us.

Q. Should we be expecting new music soon?
A. We have a full-length original album coming this summer. There are many more cover videos and a few special collaborations with some well-known artists also coming. We’d also like to let our fans know that for most U.S. tour dates, if you buy a ticket, you will receive a code to redeem for a free copy of our upcoming album.