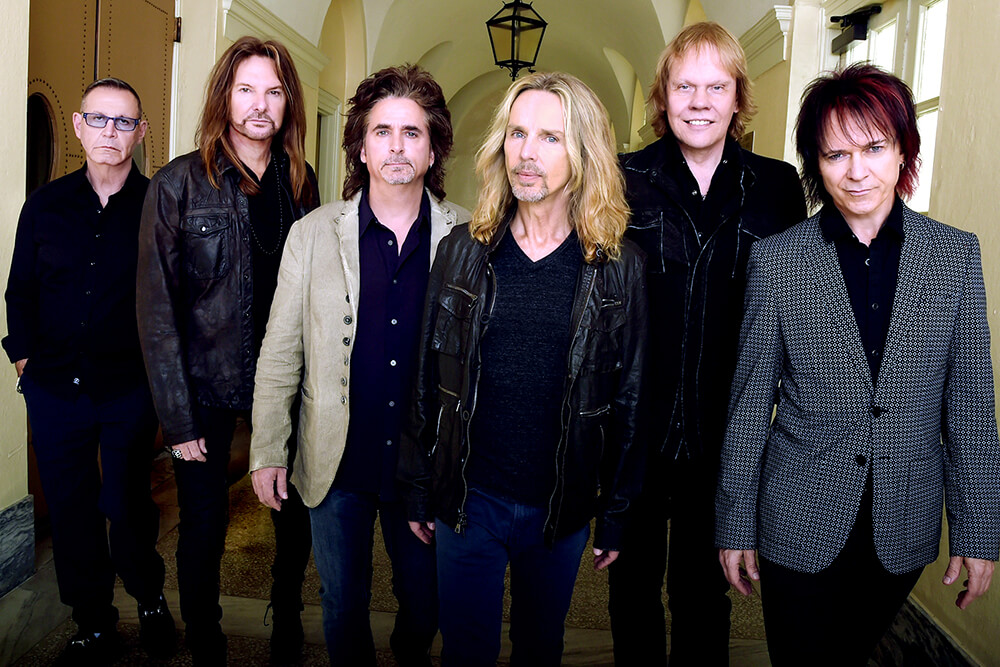 Styx has a history that looms so large, which is not surprising given the songwriting talent in the band, starting with guitar duo Tommy Shaw and James “J.Y.” Young.

If you listen, in the distance you’ll hear a haunting keyboard riff rising, bolstered by soaring harmonies and powered by 47 years of legendary rock ‘n’ roll experiences. Styx is coming to rock the Paradise Cove.

Styx is best known for its four epic albums: Grand Illusion (1977), Pieces of Eight (1978), Cornerstone (1979), and Paradise Theatre (1981). Not content to ride the ripples of fame, Styx is still creating music, most recently a brand-new concept album, The Mission, about a mission to Mars.

Since 1972, Styx has written such hits as “Blue Collar Man,” “Lady,” “Come Sail Away,” “Crystal Ball,” “Babe,” “Too Much Time on My Hands,” and “Fooling Yourself.” The group plays about 100 shows each year and is the first rock band in history to have four consecutive certified multi-million-selling albums in a row beginning with The Grand Illusion.

Canadian music legend in his own right, keyboardist and vocalist Lawrence Gowan joined Styx in 1999, helping them tour into the next century.

Q. The Mission is a gorgeous album. What can you tell us about how it came together?
A. First of all, over the years we have amassed such a great number of ideas for songs but just didn’t have time to devote them to a proper album. The notion came into Tommy Shaw’s head around 2015 that we’d better make another studio record and it better be a good one.

He came in one day with a song he was working on called “Mission to Mars.” It had a charm to it that was great, kind of refreshing and yet sounded like Styx. About two weeks later he came in with “Locomotive.” Those two songs, I thought, go together really well. They complement each other. We thought maybe a concept album built about a NASA mission to Mars. I said I’d love that. I’m a NASA enthusiast. I go to NASA on vacation.

Shortly thereafter, we got a call from NASA to go and witness a craft called the New Horizon arrive on Pluto after a nine-year mission. On that mission, they discovered a fifth moon orbiting Pluto and they named it Styx.

Everything was telling us, “Hey, you’re on a good path here. You should keep going with it.” That was one of those moments that if you wrote it in a script, you’d think it wasn’t believable.

We decided that the culmination of the album would be that they got off Mars but they continue on in the other direction, never returning home. With that kind of broad general arc to the story, the songs began to fall into place. That’s when I came into the writing team of it. I think the next one was “Radio Silence,” which became a central part of the story in that the crew is tested.

What took the record to a higher level is that we decided, “Let’s not be overly heavy-handed with this story.” It’s not a linear telling of story; it’s more of an emotional exchange between the crew members. And that’s where my voice comes in as opposed to Tommy’s or J.Y.’s [James Young]. It’s a conversation of a crew on an extended mission.

It’s easy for me to make the rather unsubtle comparison between that and life in a band. I’m seeing it more as a band interacting with each other than with a NASA crew. There are parallels between the two.

Q. How does The Mission stack up against some of Styx’s classic albums?
A. That’s not really for me to decide. When we completed it, I felt that sonically we had come as close as possible to the sound of 1979, and we achieved that through our efforts in recording the entire album analog. We went to two-inch tape and pretended that digital editing didn’t exist until the final editing stages.

In the making of the record, everything involved five guys in a room, or six when Chuck [Panozzo] would come out. But hashing through the arrangements in each others faces, that really pulled the threads together of what the band sounds like. And really, Tommy and J.Y. said this is the closest to the experience that we had making the four biggest Styx albums. This is in tandem with that classic rock spirit and what a band had to go through to make an album.

So, having said all that, yes. I think it does stand up.

Q. You refer to Paradise Theatre. Did you know the venue you’re playing is called Paradise Cove?
A. I did know that. I promise I’ll be making good use of that during the show.

Q. What can fans expect from this show?
A. Well, being Valentine’s Day, I guess they can expect that the epic Styx adventures will have some kind of extra romantic twist. First of all, the bulk of the show really does focus on the classic material, the four big albums. It’s not a secret anymore that we’ve brought back “Mr. Roboto.” He’s had a buffing up and been refurbished and is making his presence known. I really enjoy doing that one. It’s my temperament onstage.

You will be seeing the show after we’ve done our show in Las Vegas at the Palms at the Pearl Theater. We’re doing The Mission in its entirety. We’ll likely throw in a couple songs from that album, since they’ll be ready.

Q. You joined in 1999, stepping in for Dennis DeYoung.
A. If you get a call from a band with the legacy and the history of Styx, you’re going to take that call very seriously and be very honored by it. Really, the notion of a band having to make a change, and a very significant change, it’s a tough one for a band to traverse. It came down to this: They were really trying to have the spirit of the band survive, more than anything, and go on into the new millennium.

They had seen me in Canada, I had opened for them in Montreal. They’d heard me play my own music; they saw the reaction of the crowd. I’ve got a couple multi-platinum records in Canada, and a couple gold, so people know my music there.

In 1999, when they called, they said “Look, we really need a piano player and singer, and we think you might be the guy.” There was a nervous excitement about the future, and I thought if I can do something to prove these guys right, that will be an accomplishment.

Q. What’s next for Styx?
A. We’re all really excited about touring as long as the gods of rock smile on us. We do have new things cooking, now that the success of The Mission has bolstered our confidence, to make a new studio record in the next couple of years.