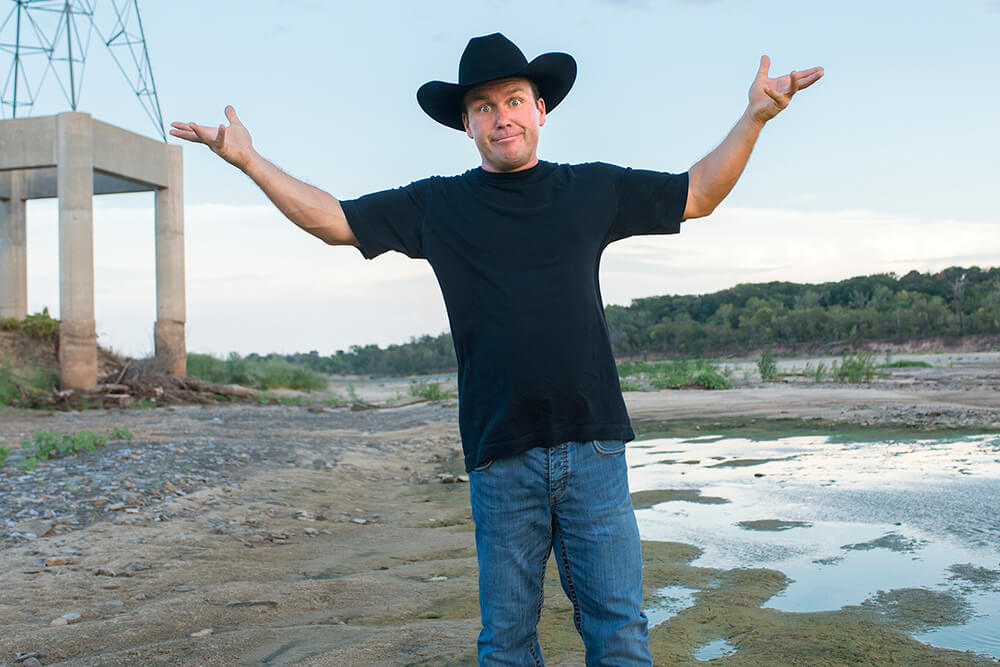 It’s an understatement to say that Rodney Carrington is multi-talented. His comedy albums, which contain both country songs and comedy material, have sold millions of copies, consistently charted in the top 10, and have won him gold and platinum status. He recorded eight albums for a major record label before establishing his label, Laughter’s Good Records, and releasing three more albums.

Carrington broke through with his major-label comedy debut Hangin’ with Rodney in 1998. Along the way to the top, he released Morning Wood, Nut Sack, King of the Mountains, El Nino Loco, Laughter’s Good, and Here Comes the Truth, all of which continue to receive airplay. His 2014 album Laughter’s Good debuted at No. 1 on the comedy charts.

Carrington’s drive has made him consistently one of the top grossing touring comedians as he performs for sold-out audiences in the United States, Canada, and Australia.

Being both a comedian and singer weren’t enough for this Renaissance man, though. He’s also an actor who starred in the ABC sitcom Rodney, which ran for two seasons and was set in Tulsa. In 2008, he co-wrote and starred in the film Beer for my Horses with Toby Keith.

His charitable organization, the Rodney Carrington Foundation, benefits charities that need a helping hand. The foundation works to foster cooperation between volunteers, agencies, and groups to strengthen communities.

Carrington is also known for his connection with his audience, both in shows and on social media, which no doubt contributes to his appeal.

Q. What can you tell us about this show at Paradise Cove?
A. They can expect what I have always brought to my show: real-life stories, the realities of getting older. I’ll also be performing new songs, along with the favorites.

Q. You still live in Tulsa. What do you love about being in Tulsa?
A. It’s a great place to raise my family. I love that Tulsa provides indoor plumbing and running water.

Q. What’s the career path that brings someone to the goal of comedian, actor, music artist, scriptwriter, and author?
A. Total luck. Hard work and great fans have given me those opportunities. I never take any of that for granted, and I appreciate it.

Q. Do you have anything new in the works?
A. Always new material coming out in the live show and also working on a new album and another Netflix special.

Q. Do you prefer working on the small or large screen? Or onstage?
A. I’m comfortable in any of those mediums. The live shows are always special to me when I can see my fans and relate with them.

Q. Who are some of your influences?
A. My three boys, parents, and grandparents.

Q. You’ve consistently been one of the highest grossing touring comedians for the last decade or so.
A. I have been very fortunate for the past 30 years and have a fantastic fan base. So many people can relate to what I talk about onstage, and we all are going through the same situations.