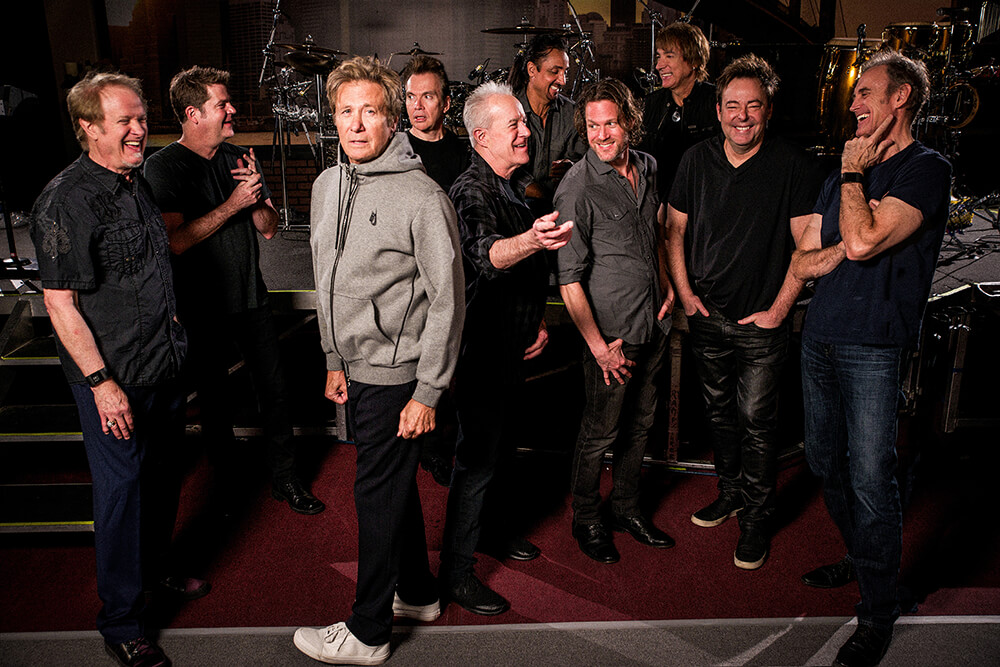 From its Windy City beginnings in 1967 to its adult contemporary dominance in the '80s and '90s, no other rock band has done it better with horns despite lineup changes and over 50 years of touring.

Chicago, the powerhouse self-described rock ‘n’ roll band with horns, enters its 51st consecutive year of touring. Billboard lists this iconic band as the greatest of all time in both singles and album chart success. As one of the rare rock bands backed up by the energy of brass and sax, Chicago has put out over 20 Top 10 singles, including “Does Anybody Really Know What Time It Is?,” “Feelin’ Stronger Every Day,” “You’re the Inspiration,” and “Saturday in the Park,” to name just a few.

Chicago is bringing a show unlike any other that they’ve done to Tulsa. Chicago will perform their double album Chicago II in its entirety. Lots of bands perform a whole record as a show, but for Chicago, that’s just the first set. The band will take an intermission, then come back for “the world’s longest encore” filled with many of their greatest hits.

Founding member Lee Loughnane called in from Las Vegas to talk to us about their upcoming show at River Spirit Casino Tulsa’s Paradise Cove concert venue.

Q: What should fans expect from the longest encore in history?

A: Peter [Schivarelli], our manager, came up with that world’s longest encore thing. You know, normally you do one or two songs in an encore, but we are presenting the second album which, when we recorded it, along with the first album, that’s all we had in our legacy, so we only played the first and second album. We didn’t have enough hits back then, so we’d play some of the cover songs that we played in the clubs. We had some Beatles songs and a couple R&B tunes that we had to play to fill out our set.

Now we have so many hits, we can’t play them all in a one-night show.

Because the first album [Chicago Transit Authority (1969)] has now gone into the Grammy Hall of Fame, the second album is in contention for it as well. So, we decided that we should relearn it and see if we can play it live for people. As we were relearning the songs, we realized that these are some really good songs. Even the writers are wondering how they came up with stuff. They’re amazed themselves.

Q: You mentioned your huge library of hits. How do you pick which songs to play?

A: When we do a show, we try to put it together so that it starts strong and then, through the course of it, bring it down a little bit. And you move it like a wave, up and down, until the final crest at the end of the set. And we try to do that with both sets and the encore.

Q: Your lineup has changed a lot over the years. How does that affect the chemistry of the band?

A: Everybody who has come in as a replacement has made the band better. I’m not sure why that is still occurring, but it’s still happening now. We have three new guys. Wally’s [Walfredo Reyes Jr.] been with us, but he’s replaced Tris Imboden on the drums, and Wally’s brother, Danny Reyes, is now playing percussion parts. Jeff Coffey has left the band and been replaced by Neil Donell, a Canadian singer. And he is great. He got standing ovations at his opening. And Brett Simons is going to be playing bass parts and background vocals. Along with Lou Pardini and Keith [Howland], me, Robert [Lamm], and Jimmy [James Pankow], we’re good to go.

I pinch myself every day. I can’t believe I get to do the same thing I have done since I was 11 years old for a living, at a top level.

Q: Your dad wasn't happy about your career choice. Did he ever come around?

A: He definitively did. He tried to talk me out of it. He said that there was no future in it. I had no idea what kind of a future this would bring.

Q: Why do you think there aren't more rock bands with horns?

A: It’s just a musical choice, I guess. They do what they like. They grow up and they hear grunge and they go grunge. A lot of the music that you hear is not as musically challenging as some of the stuff we do. There aren’t a lot of covers of our songs, because not many bands change keys a couple of times before they get to the first verse. They pick a key and play it for three minutes.

Q: Tell us about this mobile recording rig that you put together for the road.

A: I oversaw it. I had to have people with expertise tell me what stuff to buy. I tried to make it economical and effective. We have done both and built upon what I started with. We have powerful recording gear that we can make records anywhere we want, anytime we want at a world-class level.

Q: And you maintain a grueling touring schedule.

A: Some things haven’t changed.

Q: What keeps you going at that pace?

A: A lot of sleep. Travel is tough. After a while, you figure out how to survive the road. Get up and start warming up for the show, do some exercise, eat right, all the things you hear about. Because if you don’t do them, you get to suffer the consequences. You’re not ready for showtime, and that can’t be. You’ve got to be ready to put it out there, because that’s the only reason we’re here.