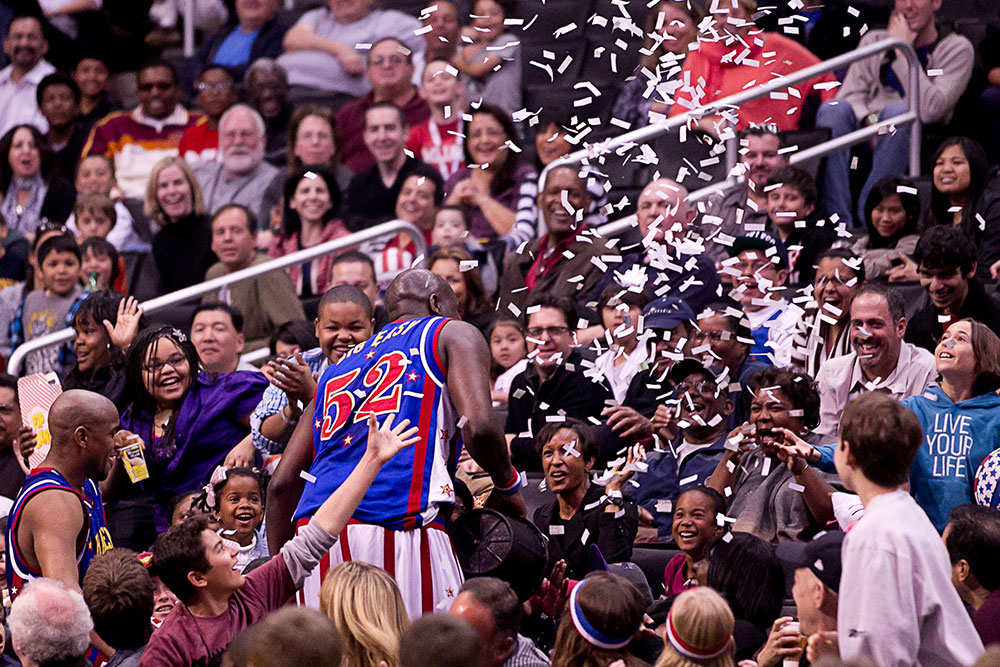 The Harlem Globetrotters are still providing buckets of fun with their unique blend of seemingly impossible shots, athleticism, entertainment and charitable works off the court.

It looked like a scene from How the Grinch Stole Christmas’ Whoville as little children were invited to come down to the basketball court at the BOK Center and intermingle with the Harlem Globetrotters. Eternal smiles spread across their young faces as they played and interacted with their favorite Globetrotters.

“I had one little boy tell me that he wanted me to come home with him. Said his father would make me breakfast, but after that, I was on my own for lunch and dinner,” says Buckets Blakes, who was known as Anthony Griggs Jr. when he was a star basketball player for the University of Wyoming back in the late-1990s and 2000.

If you’ve never seen a Globetrotters’ basketball game, you’re in for a real treat when this legendary team returns to Tulsa for two games Feb. 3 and 5. Each performance is half unbelievable basketball and half classic comedy.

Abe Saperstein founded the team in 1926, and they played their first road game in Hinckley, Ill., Jan. 7, 1927. Since then, the Globetrotters have entertained more than 144 million fans in 122 countries and territories worldwide —introducing many to the sport of basketball — and becoming pioneers in popularizing the slam dunk, fast break, the forward and point guard positions, and the figure-eight weave.

The team confirmed their standing as one of the world’s most influential basketball teams in 2002, receiving the sport’s highest honor with induction into the Naismith Memorial Basketball Hall of Fame. Buckets was the leading rebounder for Wyoming and was team captain and MVP his junior and senior seasons. As a senior,

Buckets was one of only two Mountain West Conference players to finish in the top 15 in scoring, rebounding and assists. Following graduation, he played in Europe and the CBA.

“Wyoming was interesting for a kid from Phoenix,” the 6-foot-2 guard recalls. “Some of the guys told me one day that there was a moose on campus and wanted me to come with them to see it. I took off running the other direction.

“I had no idea Globetrotters scouts were even looking at me. One came up to me and signed me to a 10- day contract, and here I am 15 years later still playing for the Globetrotters.”

This organization has fielded a team to entertain adults and children all over the world for more than 90 years now. Buckets says there is a perfectly good reason this team has stayed relevant for so long.

“We have broken down barriers,” says Buckets, who made the highest shot in team history last year. “It started out being an all African-American team, but now we have female players and are very diversified. Some people think this is the first time we’ve had women on the team when they see us, but Lynette Woodard broke that ceiling back in 1985 after she was a star player [and four-time All-American (1978-81)] for the Kansas Jayhawks. Ace Jackson and TNT are doing a great job for us, and the little girls really look up to them.

“Originally, we played for all black crowds at one time of the day and all white crowds another time of the day. Now the crowds are integrated, and we’ve been all over the globe playing for European crowds.”

Some of the routines that the team performs during games that have the fans cheering include shots made from the stands, guys sitting on top of backboards to block opponent’s shots and make easy buckets of their own, dribbling exhibitions between the legs and sliding back and forth on the floor around opponents, and a three-man weave that usually ends with the a ref ’s britches on the floor.

If you grew up pre-2000s, you remember the dribbling antics of Marques Haynes and Fred “Curly” Neal or the clown prince of the team, Meadowlark Lemon, keeping the crowd in stitches with his bucket of confetti routine for over 20 years.

The Globetrotters still entertain before the game with all kinds of magical ball handling to Brother Bones’s whistled tune “Sweet Georgia Brown,” a song they have used since the beginning of the modern Globetrotters.

“Back in the old days they might spin a ball on their finger, but now we have guys who can even spin a ball on top of a ball on top of your finger,” says Buckets, who owns the Guinness World Record for most basketball underhanded half-court shots (six) in under a minute. “We still do the bucket of water or confetti, but these days it might really be water in the bucket.”

When Buckets was recruited, it wasn’t just a walk-on-and-become-a-star situation. He had to go through training camp and a tryout.

“It’s not easy,” he says. “There are still two three-hour practice sessions a day during training camp, and then at night we learn lessons about Globetrotters games, routines and lifestyle. I call it Globetrotters University. And it’s great when some of the legends show up at a camp. Curly still comes to camp on occasion.”

Buckets says the organization is never content to rest on past successes and is constantly trying out new material, moves, shots and entertainment.

“Meadowlark used to make half-court hook shots,” says Buckets. “Now we are pushing it back, making longer hook shots. We currently hold the world record for longest hook shot in an arena. We make shots off the nose and off the head. I believe the Globetrotters first introduced the behind-the-back pass. We also have introduced a 4-point shot from 35 feet away.”

But the team’s entertaining spirit isn’t only contained to the hardwood. The Globetrotters often visit sick children in hospitals and get involved with projects to stop bullying in schools.

Buckets sees himself running his own gym someday and helping children build character and self-esteem through sports mentoring. He encourages youngsters to “Be the best you that you can be, because it’s very difficult to try and be someone else.”