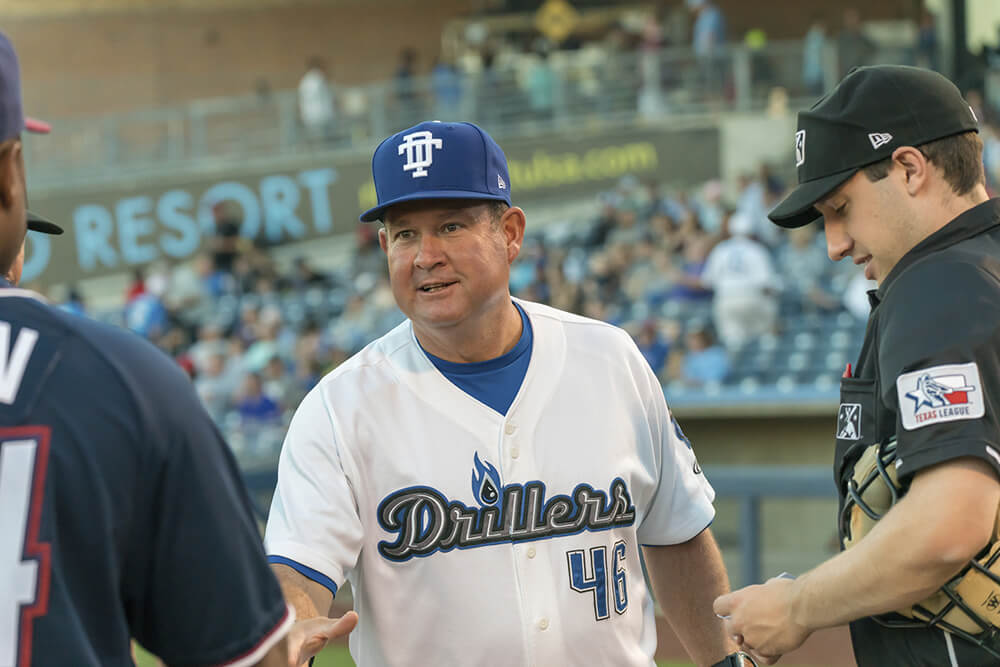 In for the Win

The Drillers will likely have a lot of familiar, playoff-tested players back this season as the Scott Hennessey’s squad competes for its second consecutive Texas League championship.

After coming agonizingly close to winning a Texas League championship in 2017, leading the final series 2-0 before it slipped away with three straight home losses, the Tulsa Drillers were motivated all last season to finish the job.

And they did that, completing the task Sept. 14 by defeating the San Antonio Missions in three straight games to claim the franchise’s first league title since 1998.

Now the question is, what can the Drillers do for an encore? Predictably, the answer from manager Scott Hennessey is, do it again, of course.

Tulsa opens the 2019 season, its fifth as the Class AA affiliate of the Los Angeles Dodgers, on April 4 at home at ONEOK Field against the Arkansas Travelers.

The Drillers will likely have a lot of familiar, playoff-tested players back this season. Hennessey is also excited to be returning for his second full season at the helm, helping the team win while also developing players for the parent club in L.A.

“The players are looking forward to starting the year off, defending their Texas League Championship, and hopefully we can do it again,” says Hennessey, who has an overall record of 112-85 (.569) in his one and a half seasons managing Tulsa. “If it’s not broke, don’t fix it. The Dodgers, they know how we go about it, they know our work ethic, they know how prepared we are, they know how we prepare the players, and I couldn’t be happier to be in Tulsa. It’s just a good fit.”

As far as team personnel is concerned, Hennessey believes the Drillers will have a formidable pitching corps, led by top Major League prospects Tony Gonsolin, Mitchell White and Dustin May.

“You never know your club in spring training, but you kind of got a good idea,” Hennessey says from the Dodgers’ spring training headquarters in Arizona in late February. “But it looks like Tony Gonsolin, Mitchell White, and Dustin May, three very high pitching prospects, could start in Tulsa, and if they do, you’ve basically got three No. 1s and they will be the strength of our club. Guys with power stuff, all of them have been up to 96-98 [miles per hour] in spring training, in big league games, and it will be really nice to have those guys.”

Hennessey also speculated about a number of other key players that he expects to be in Tulsa, citing Keibert Ruiz, Gavin Lux, D.J. Peters, Omar Estevez, and Cristian Santana as likely Drillers to begin the season.

Ruiz, a catcher, batted .268 with 12 home runs and 47 RBI in 101 games for Tulsa last season. Lux batted .324 in 88 games with Rancho Cucamonga last year, ranking third in the California League, while also hitting .324 in 28 games with the Drillers. Lux also led off Game 3 of the TL Final with a home run. Peters spent the entire season in Tulsa last year, batting .236 with 60 RBI and a Texas League-leading 29 home runs. He also hit a home run in the Game 3 Final clincher. Estevez spent all of last year in Rancho Cucamonga, batting .278 with a league-leading 43 doubles and 84 RBI, while Santana also played all season at Rancho, hitting .274 while topping the California League with both 24 home runs and 109 RBI.

“That’s a pretty good start, position-player-wise, a catcher and three prospects on the infield,” Hennessey said. “Omar and Cristian Santana did a really good job in Rancho last year, won a championship, Santana played really well in winter ball, and I’m looking for big things out of him. Omar is a second base-shortstop-type with power, and going to be a good big leaguer.”

Another player with somewhat local ties who could be in Tulsa this season is former University of Oklahoma backup quarterback Cody Thomas, who batted .285 with 19 home runs and 87 RBI (second only to Santana in the league) with Rancho Cucamonga last season.

“It looks like he has a chance to start with us, and if that’s the case, he’s going to play a corner outfield position and some first base,” Hennessey says of Thomas. “He can hit for some average with power, and I think as he plays baseball more and gets more live action against better competition, he’s going to be a really good player.”

Hennessey believes that going through the process of winning the Texas League title, along with the players at Rancho Cucamonga who claimed the California League championship last year, will only help them this season.

“I think it’s really valuable,” Hennessey says. “We’re in this business to develop, but in my opinion, you just can’t flip a light switch on once you get to the big leagues and say, ‘OK, you had your fun, now you’re expected to win.’ All these guys have won championships, at either Rancho or this level now, and for the Dodgers, we’re teaching these guys, not only how to win but how to prepare to win and it’s just a part of the process. Just looking for more of the same this year.”

It also helps that there are plenty of positive examples in Los Angeles of players who have been Drillers in the recent past and have gone on to play for the Dodgers, like Cody Bellinger, Walker Buehler, Caleb Ferguson, and Dennis Santana, among others. That shows the players that there’s a pathway for them to also make it and further motivates them.

“Exactly, we graduated those guys, that’s our job,” Hennessey says. “We want you here, but we don’t want you here long. If we’re doing our job, they’re not going to be here long. Just get them better, move them on and hopefully, they get to Dodger Stadium and become a productive big leaguer for a long period of time. And those guys we have in Tulsa, I think are going to be really good big leaguers for a long period of time.”