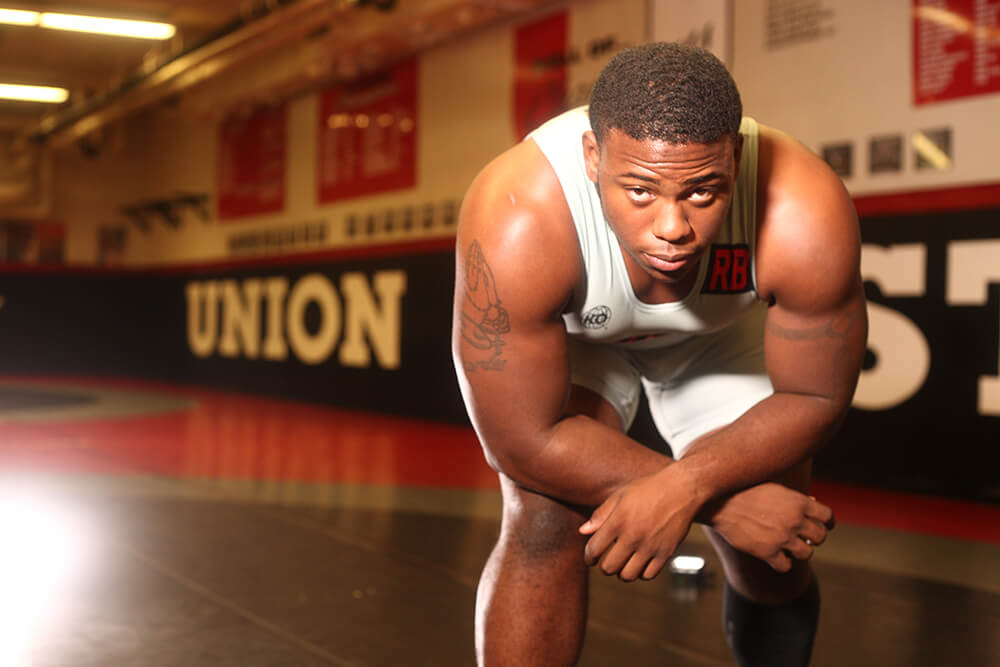 Following setbacks to a four-time state champion, Union's Micah Walker is looking to cap his senior season with the school's first individual wrestling championship since 2015.

It’s a testament to Micah Walker’s dedication that the Union High School wrestler who first started in the sport in the eighth grade could improve enough to earn a spot on the state tournament podium as a sophomore. Now a senior, Walker hopes to win an individual state championship, while also serving as a respected leader on the Union squad.

“My goal this year is to become more trustworthy with my teammates, go after a state title, and be dual champions,” says Walker, who placed third at the Class 6A state meet at 220 pounds as a sophomore in 2017-18 and finished fourth last year. “It’s an honor to be a leader and part of a great team, with great teammates. We all trust each other, and we have a bond that not many teams have.”

Union could hardly have a better role model than Walker, who has put in a lot of work as a wrestler, reaching such impressive heights while most of his teammates have been wrestling since they were little kids.

“A few people were surprised that I started a few years back, and they’d been doing it since they were in pre-K,” Walker says of his relative inexperience. “The key for me was to be patient and trust what the coaches had to say. I’m a Christian guy, so I trust God and whatever plan he has for me. So stay relaxed and wrestle to your tempo.”

Walker also attributes some of his success on the mat to his mental toughness, which he considers a significant component of wrestling.

“I feel like 90% of wrestling is mental,” Walker says. “I’ve beaten guys who were destroying me at some point because I was mentally tougher.”

Union wrestling coach Danny Jefferson praises Walker and how he’s overcome his “rough upbringing,” believing this could be his year.

“He’s overcome a lot of odds,” Jefferson says. “I would say that he’s one of the hardest working guys we have. He’s an excellent kid, a great athlete, but an even better young man. He was riding his bike up here for 6 a.m. workouts, then back home, and then back up here in the evenings for wrestling workouts. You admire that. He’ll do whatever it takes; he’s always going to be there. You can depend on it.

“He’s positioned himself to be in the championship hunt for an individual title. Anything can happen. I’m not going to say he’s the No. 1 guy, but he’s a contender. To be a finalist, to be a champion, you got to be lucky. Luck is when opportunity meets preparation. Everything has to align well. I think it’s his time.”

That is especially true with two of his toughest rivals having graduated last year: Broken Arrow’s Zach Marcheselli, a four-time state champion who was named the Tulsa World’s All-World Boys Athlete of the Year in 2019, and Jared Galli of Jenks. Walker had some epic battles with Marcheselli, coming agonizingly close to beating him twice, but falling just short, while going 2-2 against Galli.

Against Marcheselli in the 6A east regional final as a sophomore, Walker trailed 1-0 when he took him down with five seconds left for what should have been a two-point takedown (and a 2-1 Walker victory). Still, the officials ruled that it occurred out of bounds. Marcheselli won 1-0 and went on to claim the state title a week later, while Walker placed third after pinning Galli in the consolation final.

Then last year, after beating Galli 3-2 in overtime to place third in the east regional, Walker faced Marcheselli again in the state tournament semifinal. He had Marcheselli down at one point, needing to hold him for about another second or so to earn takedown points, but Marcheselli got out of it. That was the difference in a nailbiting 4-2 defeat. Marcheselli went on to win the 220-pound title again while Walker subsequently lost a 3-2 overtime decision to Galli in the consolation final to finish fourth.

The close calls with Marcheselli are both a source of pride and pain for Walker now.

While Jefferson believes Walker has a good chance to wrestle in college, as several schools are recruiting him, Walker has decided to play football in college instead. As a linebacker and defensive lineman, Walker has played football since he was younger.

The two sports do seem to complement each other, as Walker acknowledged that his wrestling skills help him tackle better on defense in football.

“Wrestling helps me a lot with conditioning and helps me be more explosive,” Walker says. “It helps me stay low when I’m tackling, and it helps with a lot of core work.”

Killer Queen
As she prepares for her senior year of volleyball at Owasso, Mallory Hendrix is poised to be one of the best multi-position players in the state.