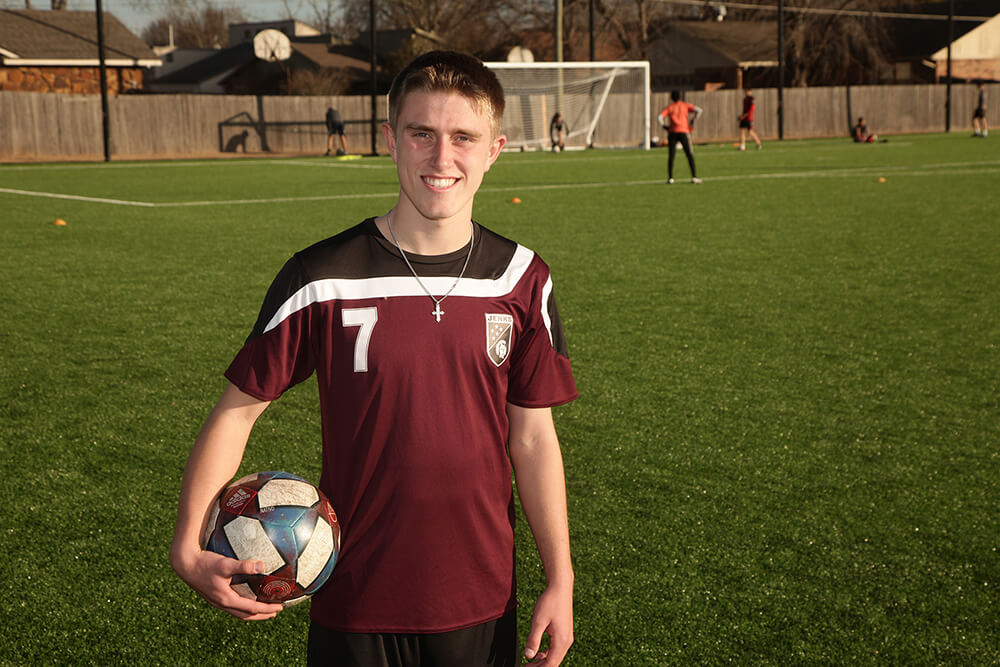 Jenks’ Will Edwards always loved soccer, having played it since he was 3 years old. But after the death of his two siblings, he took his game to another level.

It may merely be a coincidence, but Will Edwards doesn’t see it that way.

To him, there is a direct correlation between the tragic loss of his 13-year-old sister and 10-year-old brother two and a half years ago in a devastating car accident and his ascension to becoming one of the top high school soccer players in Oklahoma for Jenks High School.

Edwards always loved the sport, having played it since he was 3 years old, but after the death of his two siblings, he took his game to another level.

“I had always been good, but after that happened, my love for the game grew, because it was just such an escape for me,” says Edwards, now a senior midfielder who is committed to play at the University of Tulsa next year. “And after that, I just put all my focus on that and school. I think sports are a great way to help people get over things.”

The first season after the accident, his sophomore season, Edwards scored 12 goals and added eight assists as he helped the Trojans advance to the Class 6A state final, where they lost 4-0 to Union. He was named to the Tulsa World’s All-World First Team.

Then last year as a junior, Edwards took it up another notch, contributing 14 goals and 12 assists as Jenks put together a perfect 18-0 record, getting back to the 6A state final and defeating Union 2-1 on penalty kicks to claim the state championship. On top of all that, he was named a Tulsa World Player of the Year finalist and was awarded the Gatorade Player of the Year as the top high school soccer player in the state.

“It was a picture-perfect ending, just because not a week went by last year that we weren’t talking about a state championship and beating anyone in the final. It was even sweeter to get a little bit of revenge on Union,” recalls Edwards. “It was a very surreal experience. I didn’t think that all [the individual awards] would come. I was solely focused on going out every game and winning, getting a state championship for my team and everyone in the program, from the freshmen on up.”

Believing that his sister and brother are still watching over him, Edwards notes that the tragedy has brought his extensive collection of two blended families, which includes an older sister and three additional younger sisters, closer together. He’s also learned a lot about himself in the process.

“Every day it gets a little bit easier,” he says. “It taught me that I’m a lot more capable of dealing with things than I would have ever imagined. I know things can be a lot worse, and if I deal with it now, I essentially won’t have to do it later.”

His impressive junior season also brought the offer from TU, something he’d long been dreaming of.

“I’ve always gone to their camps ever since I can remember, and I’ve always had a good relationship with their head coach, Tom McIntosh,” says Edwards, who also played basketball through his freshman year before concentrating solely on soccer. “Going to TU was one of my goals going into high school. My junior year, that happened, and I was extremely excited.”

The fact that Edwards, who is a student council officer this year at Jenks, is seeing some rewards for his outstanding soccer performance seems fitting, based on what he’s gone through and the strong character he exudes.

“He’s an outstanding young man outside of the soccer pitch, so that kind of makes what he does on the field even more special to me,” says Trojans coach Eric Marshall. “Because he can handle himself academically and be an upstanding citizen, he is a perfect model for Jenks soccer and the overall Jenks community.”

As the Trojans prepare to defend their title this season, Edwards is ready for the difficult challenge ahead, both individually and as part of a team.

“I put a lot of pressure on myself to go out and be the best player I can be every game, so it’s not pressure because I love the game,” he says. “We expect to have targets on our back, but our team doesn’t expect anything less than a state championship this year. We’ve added a bunch of sophomores this year who have matured and can play.”

Marshall will rely on Edwards quite a bit, both for his skill on the field and in his new capacity as a team leader, mentoring his younger teammates.

“He’s one of the key pieces in the cog for our wheel,” Marshall says. “He sets things in motion. Everything does not go through him, but he kind of sets our tempo. When things aren’t going our way, we can expect him to create a goal himself, which is a luxury to have for a high school coach.

“We talked before the season that his role would be a little bit different as opposed to the past. As a senior, he’s taken more people under his wing, able to talk to them and set them in the direction that we want, like a liaison for us coaches. He’s accepted that role, and it’s going to benefit himself and us this season.”