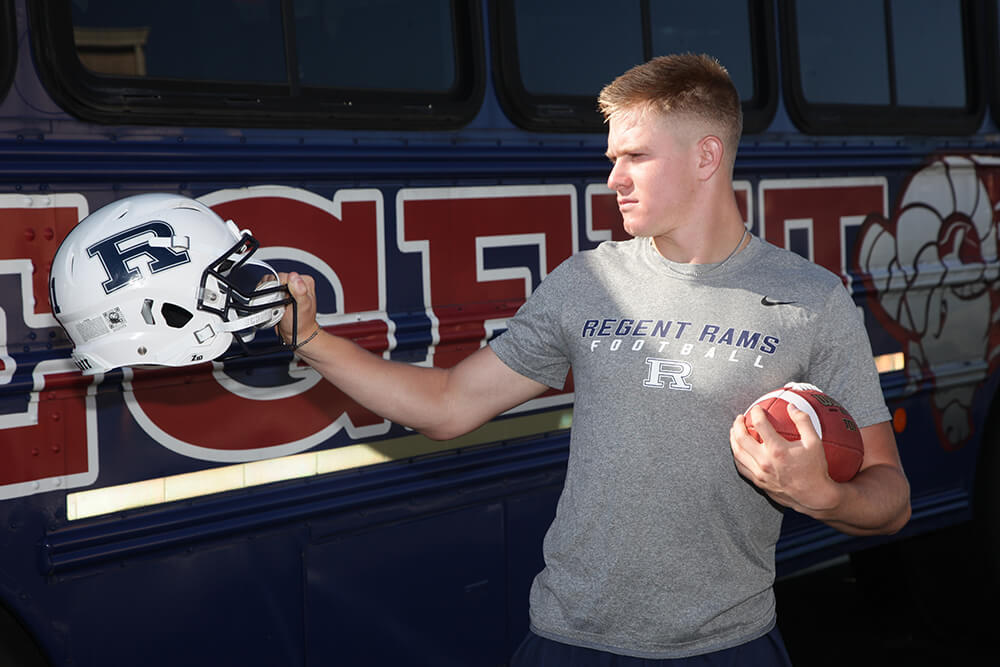 While the decision to focus on playing football at the next level overruled Regent Prep’s Jack Wright’s childhood dreams of playing college basketball, he’s confident it was the correct choice.

Basketball may have initially been Jack Wright’s first love, but throughout his high school career, he also excelled at football and developed into an outstanding wide receiver, to the point where he recently committed to the University of North Dakota.

With his senior year getting underway at Regent Prep in Tulsa, Wright is ready for one last go-round in each of the sports that he thrives in. In football, he helped the Rams go 14-1 and reach the Class B state final last season and was named a Tulsa World All-World Offensive Player of the Year finalist. In basketball, he lead Regent to a 20-8 record before falling in the Class 2A Area playoffs, being named an All-World Honorable Mention. And in soccer, he topped the Rams in scoring with 27 goals, was named to the All-World First Team and helped Regent go 11-2 and reach the Class 4A state quarterfinals, the team’s best finish ever.

“I like staying busy, it keeps me going,” he says. “I’m not going to quit all my other sports now that I’m committed [to a college]. I’m going to finish out my senior year strong, do whatever I can.”

While the decision to focus on playing football at the next level overruled his childhood dreams of playing college basketball, he’s confident it was the correct choice.

“Growing up, I’d always wanted to play college basketball, and I could probably play somewhere smaller, but I’m only 5-foot-11, and I was like, ‘It’s going to be tough to play basketball, so I might as well focus on football,’” Wright said “So that kind of made that decision. I still love to play basketball.”

But in football, which he didn’t take too seriously until he was in the eighth grade, Wright blossomed, taking a big step forward last season when he recorded 81 receptions for 1,843 yards and 34 touchdowns.

“I wasn’t even a football player in middle school, believe it or not,” he says. “I took my seventh grade [season] off to play soccer, but I played eighth-grade year because I figured I probably needed to play in eighth grade if I wanted to play in high school. My freshman year, I came into my own, and football has probably been my favorite the last three years.”

In addition to starring as a receiver on offense, Wright also plays defense, lining up at cornerback or safety, registering six interceptions, four fumble recoveries and 68 tackles last year.

“I don’t mind defense at all, but I think offense is where I’m the best-suited,” Wright said. “I love getting the ball and making plays and running routes. That’s where I find my groove, right there.”

Wright is determined to help lead the Rams to a state championship this season. After coming agonizingly close last year, falling 42-26 to Shattuck in the state final, Wright is trying to channel the frustration into motivation to finish the job this season.

“It was tough,” admits Wright, who scored four touchdowns in the defeat. “We felt like we had a lot of momentum, we were playing well, and were clicking on all cylinders. The thing is, we had multiple opportunities to win that game; we had some turnovers and some penalties that killed us in some crucial spots. It was tough, but I think everybody came out of that game looking forward to the next season.”

Wright is confident that this time, the Rams will be holding the gold ball at the end of the season.

“My thought is we’re going to win it all,” he says. “We only lost two seniors [from last year]. They were both great contributors, and one played both sides of the ball, and one was our center, and a center is more valuable than a lot of people think, but we’re coming back with pretty much the same lineup. I think we’re more experienced, bigger, and stronger. I feel like we’re the best team in the state and we’re going to show that in our play this year.”

In basketball, he is a shooting guard who helped the Rams advance to the area playoffs before losing 42-38 in overtime to eventual state champion Rejoice Christian. In soccer, as a forward, Wright was dangerous almost every time he had the ball, not just scoring a lot of goals for his team but also delivering at clutch moments. For example, he scored three goals and an assist in a 4-3 win over Catoosa to clinch the Rams’ regular-season district championship. He also contributed three goals and three assists in a 6-2 triumph over Commerce in the first round of the state playoffs.

No matter which sport he’s playing, though, Wright is intense and a hard worker who has grown into a respected leader on each of his teams.

“Jack Wright, he’s a phenomenal athlete,” says Weston Roberts, Regent’s soccer coach. “He plays football, basketball, and soccer. He has a natural, God-given ability, and pushes himself every single day to be better. And his spirit helps drive the team, so he shows a lot of leadership. He’s a great athlete and a great leader on the team.”

Playing a school sport in every season means a lot of late nights doing homework, especially at an academically-challenging private school such as Regent.

“It’s tough, I’m not going to lie, but that’s just kind of part of it,” Wright says. “The teachers do an excellent job of accommodating that, where if you go ahead of time, and say, ‘Hey, I’m going to be gone due to whatever sport,’ they usually give you the work, and you’re able to get it done. But it is tough trying to get work done on top of having a practice that ends at 6 p.m., and you’ve got a couple of hours or so of work. It might take some late nights, but they also give us built-in study halls and stuff.”

And the coaches all keep tabs on the players’ performance in the classroom, so it’s not like the athletes are getting a free pass.

“If you’re not doing what you need to do in the classroom, you’ll be in jeopardy of not playing,” Wright says. “I think that’s good with the coaches. They check in with the teachers every week, every couple of days, to see not only how the grades are, but the behavior in the classroom.”

Wright is excited for one last go-round of high school sports, noting that the community of athletes at Regent is very close, perhaps because there aren’t that many of them and a lot of kids play more than one sport.

“The cool thing I see at Regent that I think is different from other schools is where the upperclassmen are terrific friends and close with the lower classmen as well,” he says. “There’s not a hierarchy. Since we are a smaller team, we get to know those guys a lot. There’s no sort of tension or hazing or anything like that. The younger kids always come to the older guys and say, ‘How did you get through this class?’ or stuff like that, which I think creates a good community, which is cool.”

Scream Machines
Riders piloting indoor motorcycles on steroids will be looking to avoid coming off like “squids” or getting “cased” as the dirt devils flip, jump and push for a holeshot, points and cash. Brraaap!