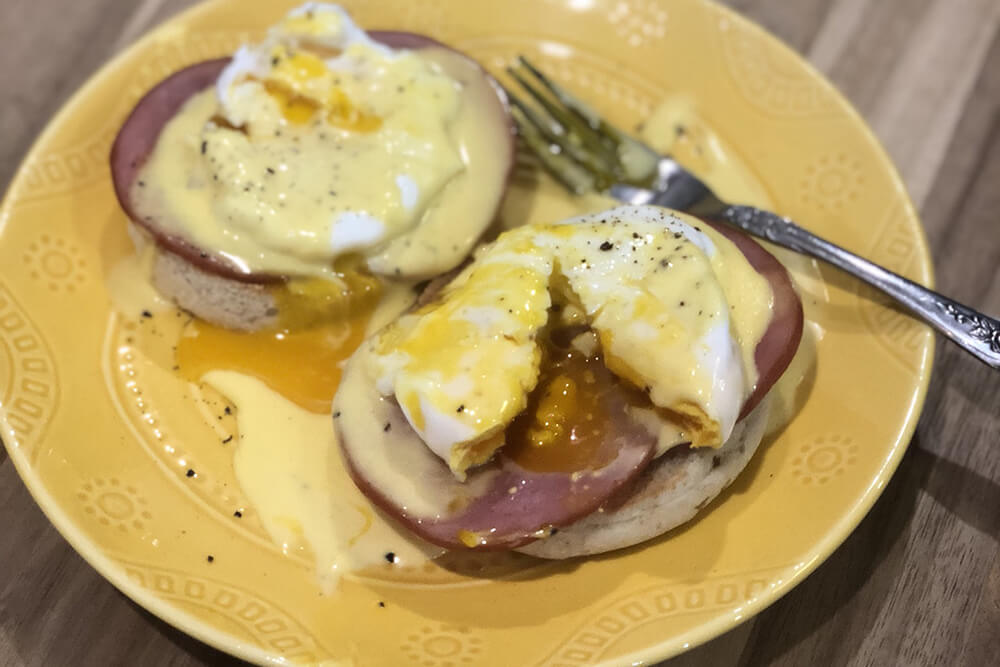 Making homemade hollandaise sauce may sound intimidating, but depending on the method you use it can also be a snap.

Eggs Benedict — the unofficial reigning favorite of the brunch menu. While the perfectly runny poached egg yolks, thick-cut slices of ham or Canadian bacon, and toasty warm English muffin base are all delicious, it’s really the generous smothering of buttery-smooth hollandaise sauce that really makes the dish.

I am a die-hard fan of eggs Benedict myself, having consumed more plates of it than is probably healthy for one person. But before my attempt documented here, I’d never endeavored to make the revered hollandaise sauce at home, because surely something that good could only be made in a restaurant, right?

First of all, there are only three main ingredients: egg yolks, a bit of lemon juice, and butter (like, a lot of butter). Then depending on the recipe, it may also include salt, freshly cracked black pepper, Dijon mustard, Tabasco, or fresh herbs, among others. Simple, right?

As I learned, it all depends on the method that you use to make the sauce. The original hollandaise recipe calls for it to be made over the stovetop, and there’s a lot that can go wrong here. Whisk the egg yolks too slow over the stovetop, and they will begin to scramble; add in the melted butter too quickly, and the eggs will curdle; fail to separate all of the egg white from the yolk, and the sauce will fluff up rather than becoming dense and creamy.

Make it in a blender, however, and it will yield the perfect, most deliciously decadent sauce you’ve ever had. In under five minutes. With virtually no clean up (unlike the stovetop method, which requires that you destroy your entire kitchen and frighten your dogs with frantic pan clattering). Frankly, I’m a little bitter it took me 30 years to figure this out.

I’d heard before that you could make hollandaise in a blender, but I did not try the blender method first for two reasons: I was skeptical it wouldn’t be as good, and I don’t like to use shortcut methods until I am familiar with the original. So for my first attempt, I went straight to the butter goddess: Julia Child. I watched an episode of Child’s cooking show and attempted to mimic exactly what she did. In some ways her method was easier than others I’d previously looked up online, as she whisked her eggs directly over a burner (many other recipes call for the use of a double boiler so the eggs don’t heat up as quick). But in other ways hers was much, much more difficult as it involved a lot of other separate pans and lots of constant whisking.

Now to be fair to Child, I probably wasn’t in the best state of mind to patiently attempt a new recipe. I was on a time limit, as I had somewhere I needed to be later on in the morning. Now, being in a hurry and attempting a new and difficult recipe is just not a great idea. I ruined my first hollandaise attempt because I was rushing and did not separate enough of the egg whites from the yolks, resulting in a foamy mess when I attempted to whisk it over heat. I had to dump it out.

For my second attempt, I removed as much of the egg whites as possible, and the sauce looked like it was coming along when my doorbell rang. It was not a good time for me to leave the stove, so I hoped whoever it was would just go away. But instead they rang the doorbell a second time, obviously not taking the hint. I answered the door, and it was my neighbor, who has an uncanny knack to feel chatty at the most inopportune moments.

So here I am with the door halfway open because I’m in my pajamas and don’t really want to be seen. I’m sweating slightly because I’m stressed and in a hurry, whisk and pot in hand, still trying to whisk away. I’m making forced small talk as both of my dogs are frantically trying to charge the open door. Then one of them pees on the floor because she is so excited. It is a miracle I did not burst a blood vessel or implode on the spot during my strained attempt to look calm and cheerful in this moment.

Finally, he leaves, I finish the sauce, and it actually looks like it’s supposed to! But then I have to poach the eggs. In 2017 I was inexplicably good at poaching eggs, but that time has since passed. After mangling a couple, I finally managed to produce an egg with the semblance of being poached. I threw it on top of a toasted English muffin, some (precooked) Canadian bacon, and slathered it in hollandaise before stuffing it down and running out the door.

And I have to say… it wasn’t gross or anything, but it definitely wasn’t outstanding. The hollandaise was pretty bland. I feel like a crazy heretic saying this, but Julia Child’s recipe calls for too much butter (who knew there could be such a thing?) and not enough other flavoring. In my very, very humble opinion, of course.

Later, when I got home for the day, I decided to try the blender method, still skeptical of how easy it sounded. The previous week, we had finally purchased a Ninja blender after wanting one for over a year, and I was excited to get to try it out. Operating at 1500 watts, this blender is seriously no joke, and it has a safety feature that the lid must stay locked on while the blender is in operation. The recipe for blender hollandaise called for the melted butter to be slowly poured into the egg yolks as they are being blended, but since I couldn’t do that I added it all at once. That was either a big mistake on my part, or else the blender was just too powerful, but either way the sauce was a runny mess and I had to throw it out.

For my fourth and final attempt, I had to dig out our old $20 Walmart blender that I was so excited to finally get rid of (go figure). I followed the ingredients and instructions exactly, and when I stopped the blender, I knew I had a winner even before I tasted it. It was decadently thick, creamy, and smooth with the most beautiful yellow coloring. When I tasted it, it was like a light from heaven shone through the roof and into my kitchen. And bonus: this round, my poached eggs were much better (still not quite 2017-esque quality, but good enough).

Follow the exact recipe for Blender Hollandaise Sauce from allrecipes.com, and you, too, can have restaurant-quality hollandaise sauce straight from your own kitchen. 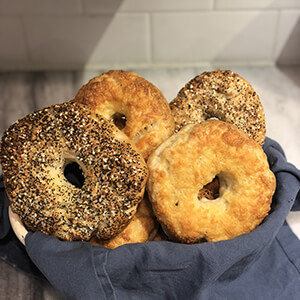