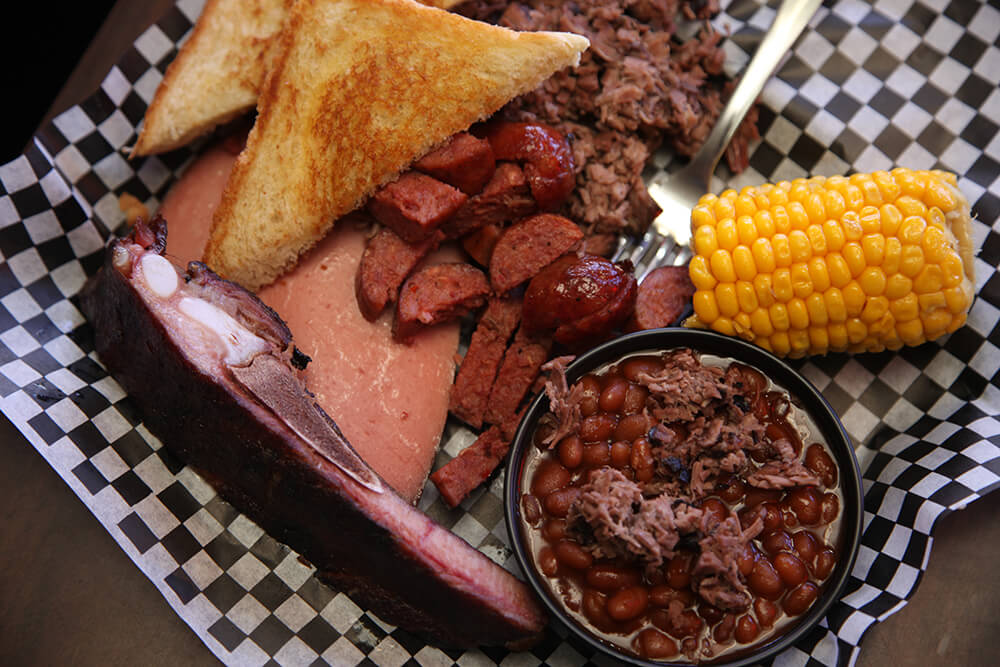 Delighted to Meat You

It be bad. The story goes that back in the 1970s a lady was enjoying a delicious meal at Elmer’s BBQ. Elmer himself stopped by to make sure she was enjoying her food. She looked up at him with a smile and said, “It be bad!”

“Back in the ‘70s, ‘bad’ meant ‘good,’” says Keith Jimerson, owner of Elmer’s BBQ. “The lady said that to him and it stuck.” That phrase, “It be bad!” adorns the signs, the front window, the catering truck, the menus, even the staff’s shirts, letting you know that Elmer’s is the baddest.

Elmer’s sits at the heart of Brookside, at 41st Street and Peoria Avenue. It’s been a neighborhood staple since 1982. “It was originally run by Elmer Thompson and his wife George Ella,” says Jimerson. “She was instrumental in running the place for 20 years.” After Elmer and George Ella passed, their grandsons tried to keep the Brookside icon going, “but it was more than they could handle, and it closed.”

Enter Jimerson, who stepped in to reopen Elmer’s BBQ in 2004. “Going to Elmer’s was a treat for me. It was always packed. If you wanted to come, you’d have to call an hour ahead, and you’d probably still have to wait after you got here,” says Jimerson, who was an industrial engineer before taking on Elmer’s. “It wasn’t my intention to run a restaurant. I planned to hire a manager, but I went through several people and eventually took it over full time and that’s been the last 15 years.”

Elmer’s is a generous and spacious location with a classic black and white tiled floor. Stepping inside feels like you’ve entered a small town’s barbecue shack. An old-fashioned counter with stools sits at one side of the dining room. The savory, tempting scent of smoke and flavorful meats fill the air. Blues memorabilia cover the walls, like vinyl records, guitars, clarinets, a cymbal, trumpets, and pictures of blues legends like B.B. King and Buddy Guy. An old, upright piano sits against the wall as if a blues band is going to come out and play at any moment.

The crowning touch to the feel of the place is the genuine blues playing over the speakers.

“We started with jazz,” says Jimerson, “But jazz is too laid back. Blues is more rowdy. We put the artists on the wall and play their music. Lots of kids come in and do papers over the artists. Customers bring things in and we put them on the walls. It’s been fun piecing it all together.

“I’m trying to recapture the feel of authentic Oklahoma barbecue. It’s not fancy. It’s pure barbecue on a plate. It’s good food, not doctored up. Like the food at grandmother’s house. This is old-school Oklahoma barbecue. Not Texas, not Memphis. Oklahoma people like plain, really good food. Not overly pricy. Not foo-foo food.”

There is no foo-foo food on an Elmer’s plate, that’s for sure. Jimerson believes that at any barbecue place the ribs and the beef must be right. “They’re center of the plate items. They’re the staples.”

He’s achieved that goal. Elmer’s baby back ribs are fall-off-the-bone tender, full of smoky goodness and so tasty and juicy you don’t have to drown them in sauce. The brisket is moist and hearty, earning its place at the center of that plate.

Elmer’s smokes its meats using hickory with a little bit of oak and pecan. “Hickory is the best for smoking,” Jimerson says, “But it’s expensive because only old-timers are cutting it these days. You find a supplier who seasons it properly, splits it a certain way, who can bring it to you consistently, the way you like it.”

“Consistent” is something of a buzz word for Jimerson. He wants his customers to know that they’ll get the same quality meats and sides with each visit. “We’re all about the quality,” he says. “Our hot links are from Mountain View. They’re the best we’ve tried, and they’re made in Oklahoma.”

If it’s your first visit to Elmer’s, try the Badwich. As the menu says, “It’s got it all!” You can get this platter of goodness served on a bun as a sandwich, or with Texas toast and enjoy it as a plate. The Badwich comes with one of Elmer’s fantastic ribs, a generous helping of chopped brisket, a layer of the Oklahoma classic smoked bologna, and your choice of hot links or smoked sausage. The Badwich comes with two of Elmer’s side items.

Speaking of side items, Elmer’s sides are not afterthoughts. There’re chunks of rib meat in the green beans, the coleslaw is seriously creamy and slightly sweet, and the baked beans are loaded with chunks of beef.

If you’re looking for a healthier option, Elmer’s has smoked salmon waiting for you. “We take a whole side of salmon and smoke it. It’s got a nice following. It’s really good,” says Jimerson.

But what about the sauce? Listen, these smoked meats don’t need sauce, but of course Elmer’s brings it. The sweet sauce is honey-sweet with enough tangy to balance it. It’s especially good on the smoked bologna. The hot sauce is not kidding around. It adds a serious kick. The mixed sauce would be Goldilocks’ favorite; the perfect blend of the sweet and hot is just right. And all the sauces are available for sale for you to take and enjoy at home.

Elmer’s loves to cater. “We’ve done groups, businesses, churches, weddings, graduation, even a divorce party. We’ve done up to 2,000 people.” Give Elmer’s a call if you’re looking for some seriously good, Oklahoma-style food for your next event. The restaurant itself can host big or small parties, and they offer dine in and carry-out. 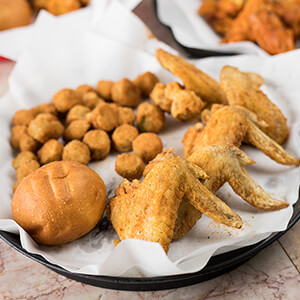 Chicken This Out
It only takes one taste of that secret seasoning, one bite of a Philly cheese steak, or one wing coated in a variety of delicious sauces for you to become an instant fan of Rozay's Wings and Things. 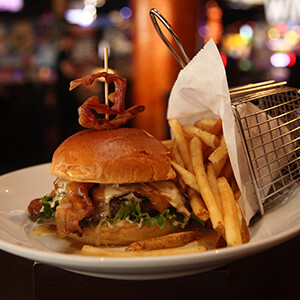 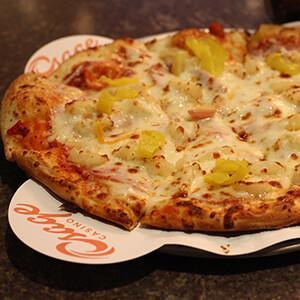 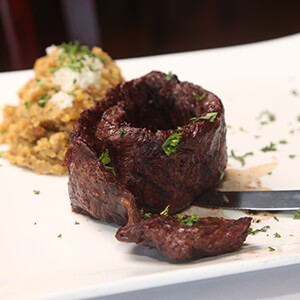 The Night Stuff
Miami Nights Cuban Restaurant takes the fresh ingredients of the Caribbean, some Jamaican influences, a dash of French, African, and Chinese tastes, and finishes it up with a dusting of island life.