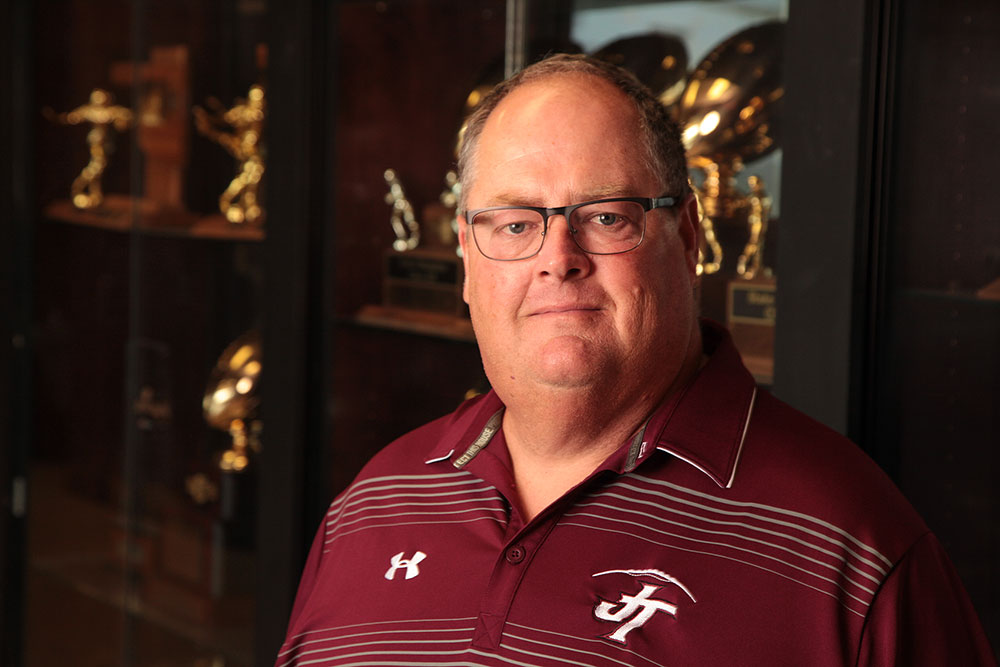 Since being diagnosed with ALS, Jenks’ Allan Trimble has found himself battling many changes, but the disease still hasn’t robbed him of his love for life or his passion for mentoring.

Since he started coaching football at Jenks High School in 1996, Allan Trimble has led the Trojans to state championship victory an amazing 13 times. Many of his players have been state all-stars, and some, like Rocky Calmus and Garrett Mills, have gone on to NFL careers. He was named one of U.S. Cellular’s two Most Valuable Coaches in the country, was inducted into the Oklahoma Coaches Association Hall of Fame in 2015, and recently garnered a Lifetime Achievement Award from the Tulsa World. Trimble is considered the most successful football coach in Oklahoma history.

Yet when you meet the man, his achievements in sports are not what stand out the most. Trimble is talkative and laid back, personable, likable, humble and honest. What, you might wonder, is the secret to Trimble’s success, on and off the field? Start digging, and you find out.

Interestingly, Trimble fell into coaching as a career rather than pursuing it. He didn’t grow up wanting to coach and had no plans to do so after he graduated high school. But he did love playing — especially baseball, a sport he doesn’t coach. “I really loved sports,” Trimble says of his youth. “I went from sport to sport, and honestly, growing up, baseball was probably my favorite sport, and maybe even my best one.” So how did he get into coaching?

It all comes down to a mixture of good examples, and a bit of serendipity. “My high school football coach, who is a Jenks alum [Ron Wolfe], had a huge impact on me,” Trimble says. “He was a great guy, he got a lot out of me and really made me enjoy football. He motivated me. I really liked it. He was a good man, he stood for good things, he got a lot out of the kids, and that was maybe the first seed of thinking, you know, I like that. That’s really cool.”

A serious knee injury in his senior year of high school dampened his hopes of attending a big college on a scholarship, so he began working in the oil industry, which was booming in his hometown of Cleveland, Okla., at the time.

“I had a good job, made good money, so I really hadn’t made any [other] arrangements,” he says. “But one of the coaches who had recruited me before my senior year was in Tahlequah at Northeastern State. He called and asked me what I was doing. I said, ‘Nothing.’ So he said, why don’t you come on down? We’ll let you walk on and see how it goes.”

Trimble played football for NSU, got his bachelor’s and master’s degrees, and became a math teacher, with some requisite coaching on the side that comes with many teaching jobs. His first coaching responsibility was girls’ track in Owasso, not something he’d ever planned, but he says he learned a lot about mentoring through that experience.

“I discovered the true reason for being a coach and mentor,” he says. “Once you discover what you love to do, you don’t really ever go to work.”

The recipe for success at Jenks has been the same since Trimble became head coach in 1996. “Our priorities have always been faith, family, academics and football,” he says. “All those pictures and trophies are for the fans, because that’s what they see. But I truly believe in my heart that winning is a byproduct of doing more important things. And that’s what we do. We work more on that than putting our punting team together. We really feel if you make better people, you make betters players.”

One way the team builds better people is through charitable work. With Trimble's leadership, the Jenks football team has sponsored dinners and raised funds for the local Special Olympians chapter. Trimble’s team also helps sponsor the local Fellowship of Christian Athletes chapter. “In the spring,” he says, “We do Feed My Starving Children, which is an awesome mission trip to Guatemala. We believe that servanthood is one of our key pillars, so we work on that pretty hard.”

The mission trips have been led by local pastor Paul Phipps, who is also one of Trimble’s many mentoring success stories.

“Phipps was a great safety, good running back,” says Trimble. “He was rowdy, been known to cause trouble, get into some trouble.” Long story short, some good mentoring helped turn him around, and now he’s helping others. It’s a key reason Trimble does what he does, though he doesn’t always get to see results like that right away.

“The thing about mentoring is, you don’t get instant feedback. You don’t get to see the results all the time,” he says. But Trimble does see many of his players after they graduate. As he goes over a list of his all-star players — maybe 40 or more former students — he knows where almost every single one of them is living and what they’re doing, years after he coached them. It’s the kind of connection and caring that a person can’t fake. You either have it or you don’t, and Trimble clearly has it in spades.

These days, Trimble is facing a challenge like none other, and it has nothing to do with what happens on the football field.

He was diagnosed in 2016 with ALS, a progressive and always fatal neurodegenerative disease. “There’s no cure, there’s no medicine, there’s no therapy,” he says.

Coming to grips with ALS has not been easy for him, his wife, his daughters and the Jenks community. He tried to retire last year and was convinced to stay on as Jenks’ head coach, but his symptoms have slowly worsened. It’s hard for him to type, and he can’t tie his own shoes without help. But you wouldn’t know it from his demeanor, which is as energetic as you might expect from someone who loves life so much.

“Thank the good Lord for my faith and all these great human beings in my life,” Trimble says, finding a silver lining in his situation. “The support has been overwhelming.” And ultimately, you have to keep moving forward, as he proves every day.

“It is what it is,” he says with the wisdom that only comes with a hard experience. “You better go live.”