Does it get any better than feeling like you just sat down to an authentic Italian dinner on the Lower West Side of New York City? At Mondo’s family-run restaurant, that’s pretty much what you get in Tulsa’s “Lower” Brookside on Peoria. Mondo’s homemade ravioli or baked tortellini are sure to take your taste buds straight back to the old country, or at the very least, the Big Apple. Customer favorites include the hero sandwiches, lasagna, the antipasto (which is generously portioned), and the pizzas, which are wood-fired and tasty. Don’t forget a cannoli for dessert. The filling is authentically Italian in style, and the pastry is filled just before serving so it retains its crispy exterior. The meal portions are ample and satisfying, just like you’d get from an Italian grandmother. Menu items like salad and bread are included with meals, rather than extras.

The story of Italian food in America is a story of passion, family, the right ingredients and immigrant success. And Mondo’s comes by its authenticity through blood and DNA.

Owner Rob Aloisio’s grandfather, Angelo, came to the U.S. from Abruzzi, Italy, an area east of Rome known for its rich, robust cuisine and homemade limoncello. His grandmother’s family came from Naples, which is south of Rome and known for its glorification of spaghetti with sauce ragu (a meat-based tomato sauce that is thick and rustic) as well as being generally considered the birthplace of pizza.

“My grandfather is the one who came over from Italy in 1920 through Ellis Island just like many other Italian immigrants,” says Rob. “He was 15 years old, brought the family recipes, and he also became a chef.” In fact, Angelo became an executive chef in New York City, the land of Italian restaurant bliss. Through Angelo, Rob and his father, Lou, gained an appreciation for good cooking.

The Aloisio family arrived in Tulsa in 1967, after Lou was transferred to the area by his employer. “He was a sales manager for Cities Service Oil,” says Rob. “He wanted to open a restaurant. We were going to call it Aloisio’s, but he didn’t want his name on the restaurant in case it was a flop. So he went with his middle name Mondo.”

But Mondo’s was anything but a flop. Angelo came to help his son run the restaurant, and it was successful for years. Then Rob and his brothers (Mike and Chris) decided they wanted a change of pace. So in 1997, the restaurant was shuttered, and the brothers went on to do different things.

But the bug to serve up the best in Italian cuisine never disappeared completely. Fifteen years after Mondo’s shut its doors, Rob opened the restaurant again in the busy Brookside area, aided by his brothers and father. They’ve been busy ever since, proving that Tulsa loves a good red sauce, flavorful meatballs and sausage, and homemade pasta.

The restaurant’s dining floor is pleasantly intimate and almost always hopping with lively business. Photos of generations of the Aloisio family line the walls, making for entertaining viewing while you wait for a table or sit chatting with friends over some good wine and the homemade garlic bread. Among the over 200 pictures, see if you can spot Angelo’s passport photo from 1920, Lou with Muhammed Ali, Barry Switzer, or Rob playing sports in California. “One of my alltime favorites is my grandparents’ wedding photo from Italy,” Rob says.

If you encounter a wait when you arrive, don’t be too dismayed. You can always order a drink and chat, or browse the nearby stores for a bit. “It’s such a small, cool little shotgun-style Italian restaurant in a very popular area,” says Rob. “We’re on a wait pretty much every night. I like the small, busy joint.” There are secrets to avoiding a wait, though: arrive before 5 p.m. to avoid the dinner rush, or snag a seat at the bar where the bartending staff are friendly, funny and very good at what they do.

If you do have to wait for a table, you won’t be disappointed by the food once you sit down. A lot of what goes into a delicious Italian meal is using just the right ingredients. Mondo’s does that with specialty ingredients, like Roma brand tomatoes and imported high-end olive oil. “I get a lot of things imported from Italy,” says Rob. “We use the best ingredients you can basically buy.”

What the kitchen staff does with those ingredients is a form of magic and artistry that they guard carefully. “We go above and beyond. There are ways of cutting corners, but we don’t.” From the homemade pasta, hand-filled raviolis and signature tomato sauces to the homemade meatballs (made with ground beef and veal, not pork) and Italian sausage, everything is made in-house, including the salad dressing and all the pasta sauces. “Everything from our meat sauce to our Alfredo, it’s all made daily from scratch.”

Among the best parts of a meal at Mondo’s is, as you’d hope, the tomato sauce. Its making is a bit of a trade secret; only Rob and his family members know the exact blend of spices that go into every delicious batch. “I come in once a week to do 50 tubs of spices to get us through the week,” says Rob. “Then my chef knows how to sauté the onions and the garlic and all that.” They simmer the sauce for a long time, a key to making a good Italian tomato sauce.

The meal portions are ample and satisfying, just like you’d get from an Italian grandmother. Menu items like salad and bread are included with meals, rather than extras. “You come here, you get the whole meal.”

Customer favorites include the ravioli, lasagna, the antipasto (which is generously portioned), and the pizzas, which are wood-fired and tasty. The hero sandwich, says Rob, is among the best in town — made with pepperoni, Genoa salami, capocollo, prosciutto, Italian cheeses, lettuce, tomato, onion and homemade Italian dressing. “It really put Mondo’s on the map,” he says.

There are always chalkboard items to choose from — some of which will be added to the menu as permanent items in the next few months. And don’t leave before sampling the tiramisu, cannolis or the limoncello, a lemony Italian after-dinner liqueur made in-house. If you’re a more serious imbiber, the restaurant’s full bar can set you up with a nice selection of wines, beers (including Peroni) and mixed drinks.

If you want to take the taste of Mondo’s home, you can buy their homemade salad dressings and pasta sauces. Rob has plans to one day make them into a line of official products. The restaurant also is popular for catering jobs, and Mondo’s is happy to cater just about anything they normally serve. “Anything on our menu, people can buy it in bulk,” Rob says.

All in all, Mondo’s invites you to be more than a passing customer; they want you to be part of the family. “One of us is always here,” Rob says of himself, his brothers and his father.

“We’ve made so many new friends and old friends, and it’s just a great atmosphere. It’s kind of like that Cheers thing. Everybody knows each other; everyone knows our wait staff. It’s a totally family owned and operated business, which is very rare in the restaurant business.” Be sure to say hello when you stop in, because they will be glad to get you know you and serve you with Italian pride and tasty meals you won’t forget. 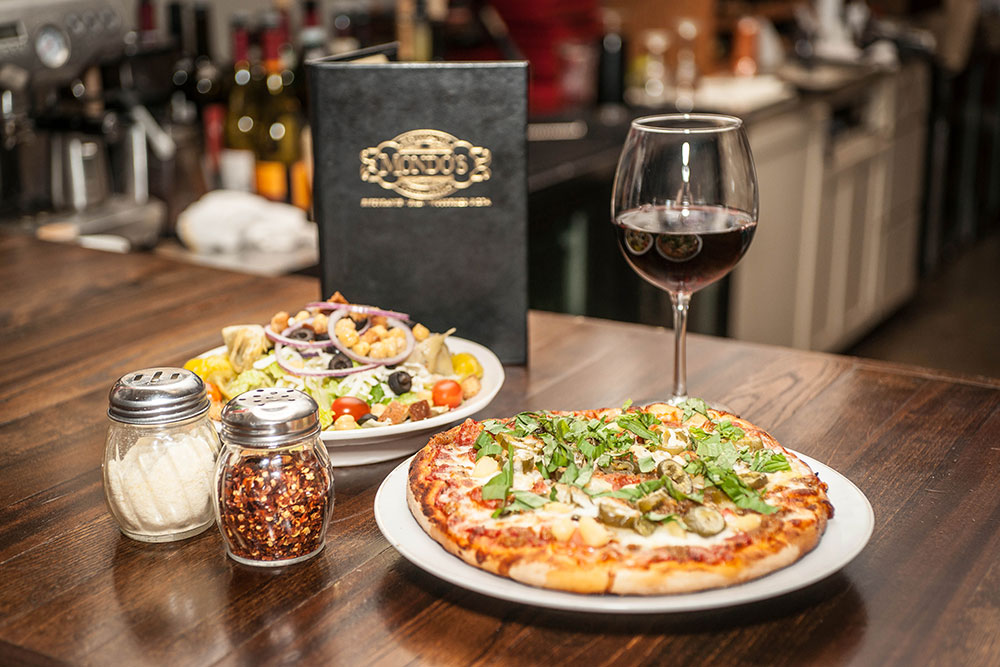 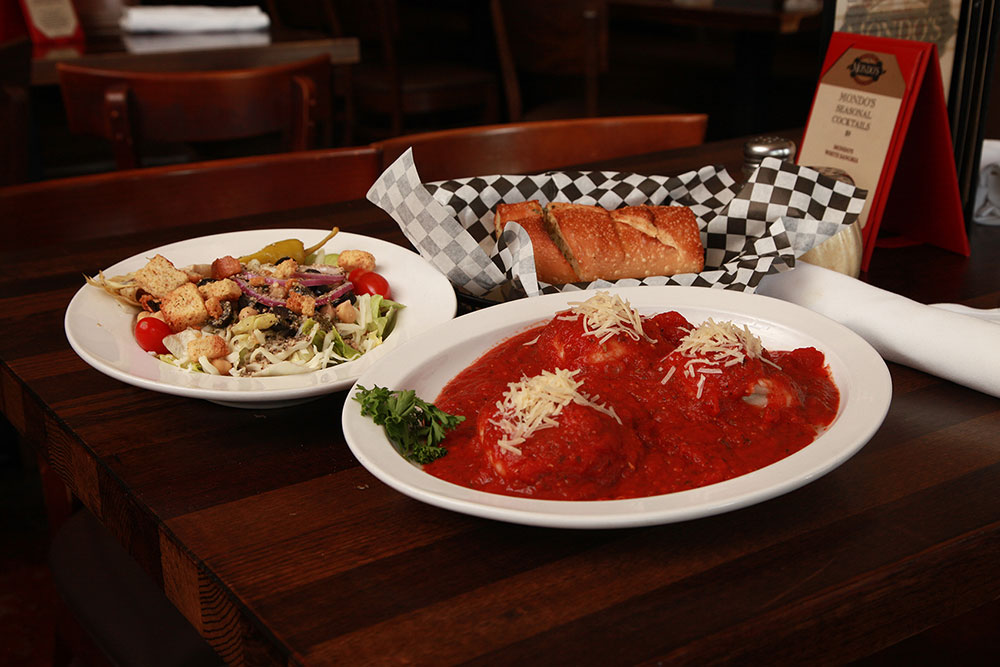 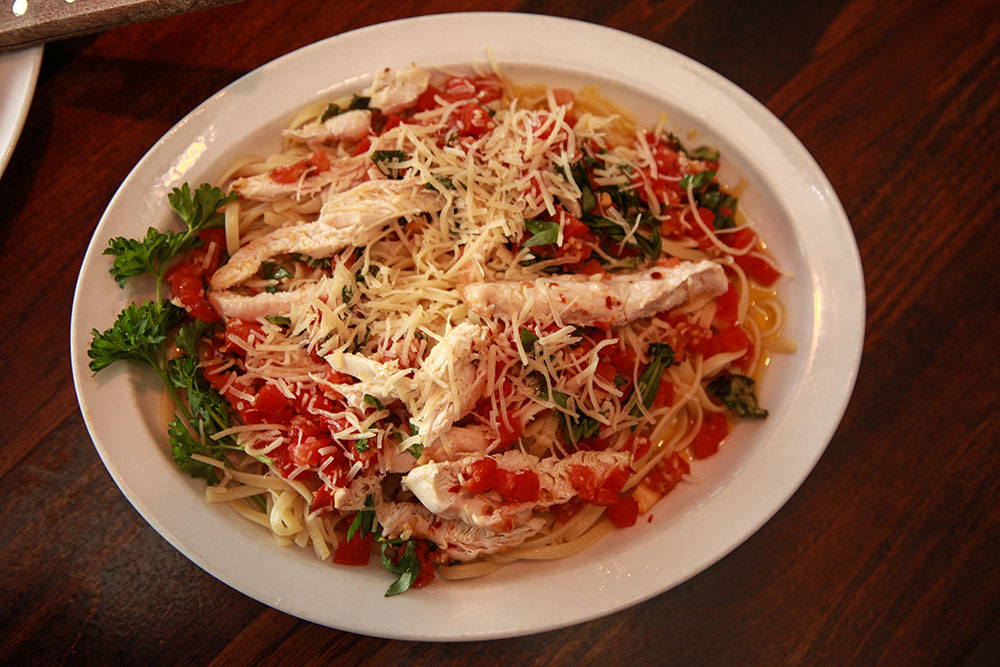 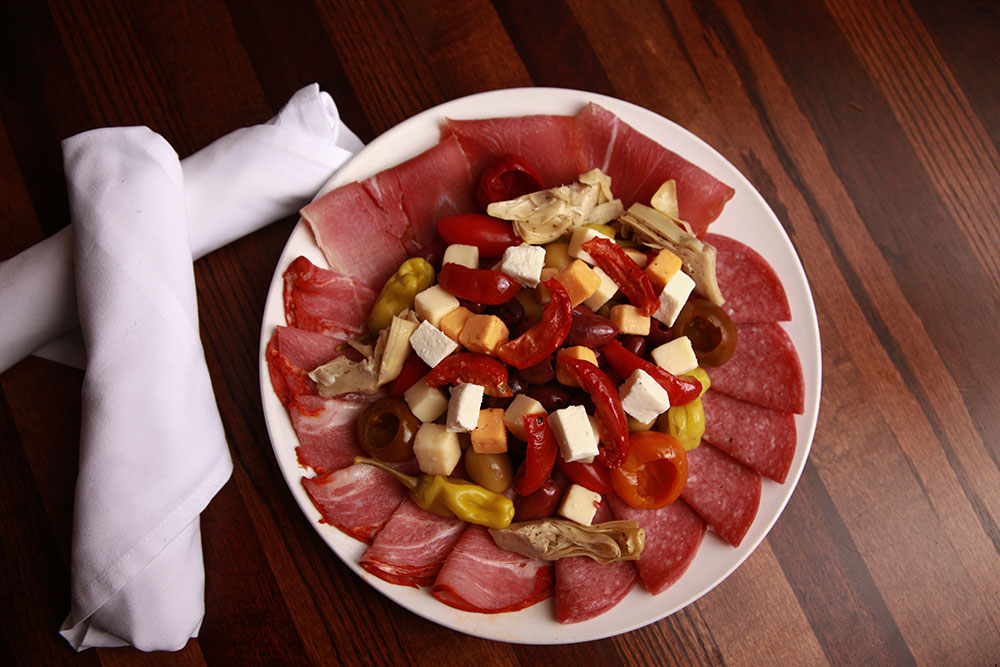 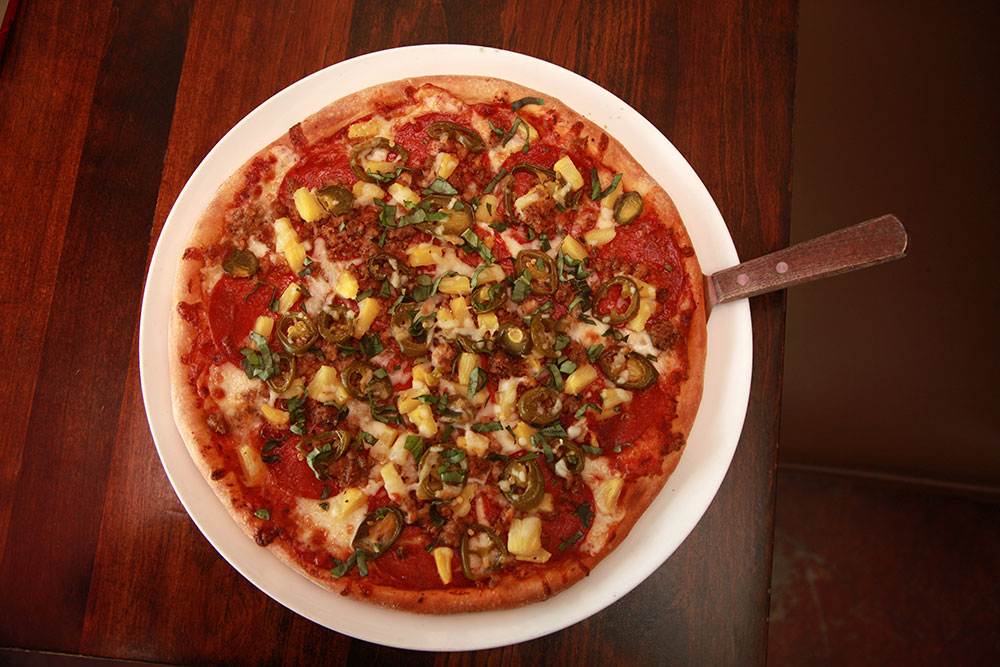 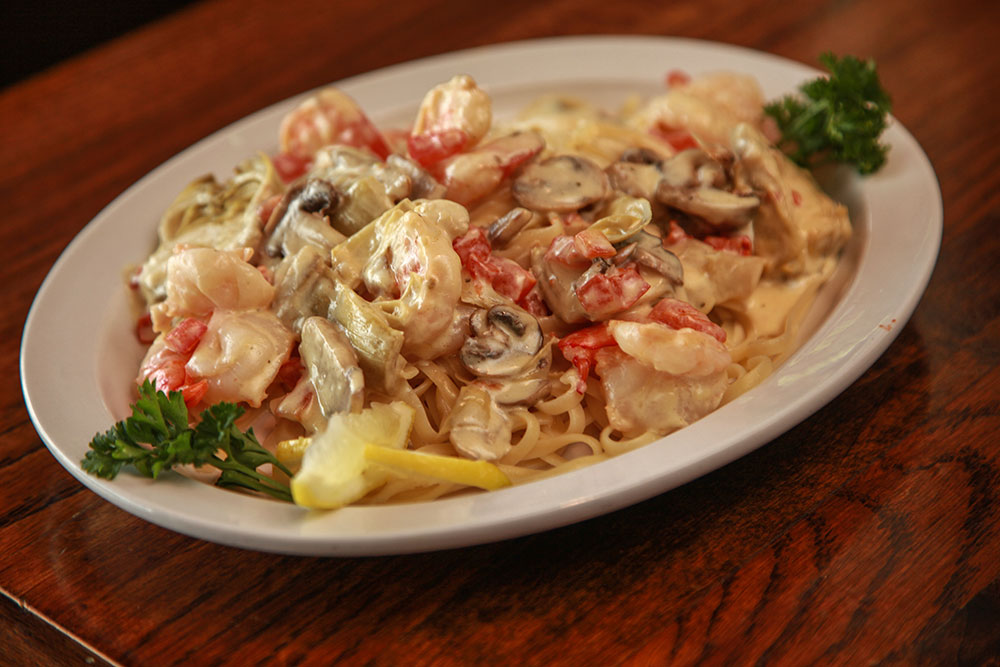