Comfortable, laid back, easy to love — Caz’s Chowhouse is essential to any visit you make downtown. And if you want some comfort-food chicken dishes, baby, this is the place to go. From the chicken and waffles (crispy tenders served over a sizable Belgian waffles with syrup and a side of black-eyed peas) to the hand-battered, plate-sized chicken-fried chicken draped lovingly over mashed red potatoes with skillet gravy and green beans. Have some hot coffee and enjoy a variety of classic brunch selections served up with Tulsa flair. Among them: the chicken-fried steak and eggs, the rib-eye steak and eggs, a grilled cheese and fried eggs sandwich that melts in your mouth, and the “Hot Mess” — a fresh biscuit topped with cheese fries, eggs and chicken-fried steak — the perfect meal for after you’ve been a hot mess. For lunch, try the Big C, with two half-pound patties, double cheese, bacon and all the fixings. Caz’s will not let you down before (or after) a heady night on the town.

Wouldn’t it be nice if, after visiting downtown, you could find someplace affordable to eat? A casual place where you could relax and be comfortable? Tulsa’s downtown is known for art deco architecture, concert venues, museums, cathedrals, and a plethora of dining options.

You don’t have to leave downtown for a meal that won’t empty your wallet, though. Whether you’re coming from the Brady Theater, Cain’s Ballroom, or the Tulsa PAC, Caz’s Chowhouse, the affordable, comfortable restaurant option, is nearby and convenient, with great food and a welcoming vibe.

Caz’s Chowhouse is in an old brick manufacturing building across from Caz’s Pub. Nine years after opening the pub, Jeff Castleberry, along with his wife, Amy, opened the Chowhouse. “We were fans of The Brook,” says Castleberry. “We wanted to be a little more upscale, but affordable and easy to walk into. We wanted a classic diner, with comfort food.”

Fifteen years later, Caz’s Chowhouse is everything Castleberry was aiming for. The interior is eclectic and charming with an old-fashioned bar, awnings, strings of party lights, and a loft overhead for groups or events. A chalkboard taller than the servers keeps you informed about what tasty dishes are featured or on special. Classic rock fills the space along with the natural light streaming in the windows. And, of course, the exposed brick, reminding you that this building has a long history in downtown Tulsa.

“When we opened, we brought our own twist on comfort food,” says Castleberry. “We wanted a unique menu. We were the first people to bring in chicken and waffles. We were one of the few places offering a Cuban sandwich. We make our chicken tenders big, fat, and juicy. We do our best to serve great comfort food.”

Another popular choice is the southern-fried catfish. Domestic catfish is coated in seasoned cornmeal and fried perfectly crispy. It comes with Caz’s extra tasty spicy slaw and french fries. Everyone has their favorite catfish place. If you give Caz’s a try, it just might become your new favorite.

Castleberry’s favorite is the chicken tenders. These are some chunky strips of chicken. They’re battered and fried up crisp, while tender and juicy inside. The batter is seasoned to set off the chicken just right. These thick strips of white meat will make a believer out of you, served up with a dipping sauce and a side of your choice. You can get those chicken tenders served on top of a waffle. The crispy, savory chicken tenders are served on top of a fluffy Belgian waffle, with syrup and a side of black-eyed peas.

Pucker chips are a great choice for a starter. You get a basket of sliced dill pickles, coated in seasoned cornmeal, and fried crispy and brown. You can get yours topped with cheese if you like. The whole thing is a perfect crispy, briny, savory bite sure to start your meal right.

If you’re in the mood for a salad, Caz’s can set you up. Consider the traditional Cobb salad, beautifully served with lines of toppings covering the romaine. You can have your choice of chicken, turkey, or ham, alongside the spinach, tomato, egg, avocado, and a generous serving of bacon. Corn and black beans add texture, while feta adds a creamy, salty counterpoint to the savory toppings. Don’t overlook the spinach bacon salad. Fresh, organic spinach is topped with sizzling bacon, egg, red onion, tomatoes, and crowned with Caz’s sweet tea marinated chicken breast.

If you like your entree served between two slices of bread, consider the sliders. You can get your fluffy yeast rolls with chicken tenders, pickles and mayo, or loaded up with to-die-for slow-roasted barbecue pork and spicy slaw. The Cuban is another must-try. Caz’s takes pork loin and marinates it in Cuban coffee, cooks it up perfectly, stuffs it inside French bread, then serves it topped with ham, Swiss, mustard, and pickles. The whole thing is pressed Cuban style.

You might not expect much from a steak served at a “comfortable and affordable” restaurant, but the 12-ounc rib-eye can stand up to anything served at most steakhouses. “It’s never just 12 ounces,” explains Castleberry. “Sometimes it’s more like a pound.” This tender and flavorful steak is cooked to your preference, seasoned wonderfully, and served with your choice of sides.

Finish off your meal with one of the delectable desserts. “My go-to is the s’mores brownie,” says Castleberry. It’s a warm brownie with a graham cracker crust and embedded marshmallows, drizzled in chocolate sauce and topped with whipped cream and vanilla ice cream. Another indulgent choice is the bread pudding. It’s made in-house and topped with a fantastically rich Captain Morgan spiced rum sauce and ice cream. If you’re more the apple type, check out the apple dumpling. It’s made with tart green apple and wrapped in a buttery, flaky pastry dough. The whole thing is topped with cream cheese and raisins, cinnamon sauce, and vanilla ice cream.

If you’re vegan, or love someone who is, try the Impossible Burger. This burger is made from plants but uses science to make it have the feel and taste of meat. You won’t believe no cows were harmed in the making of this tasty burger.

Castleberry loves to cater, so if you have an event be sure to give him a call. “It gives me a chance to open up the options and work to a budget.” 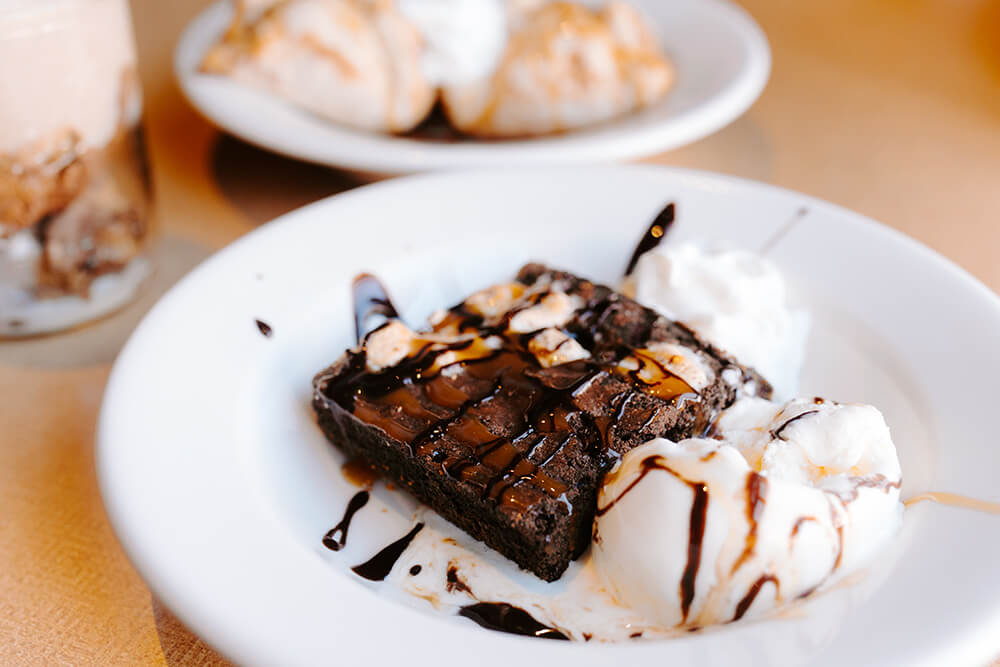 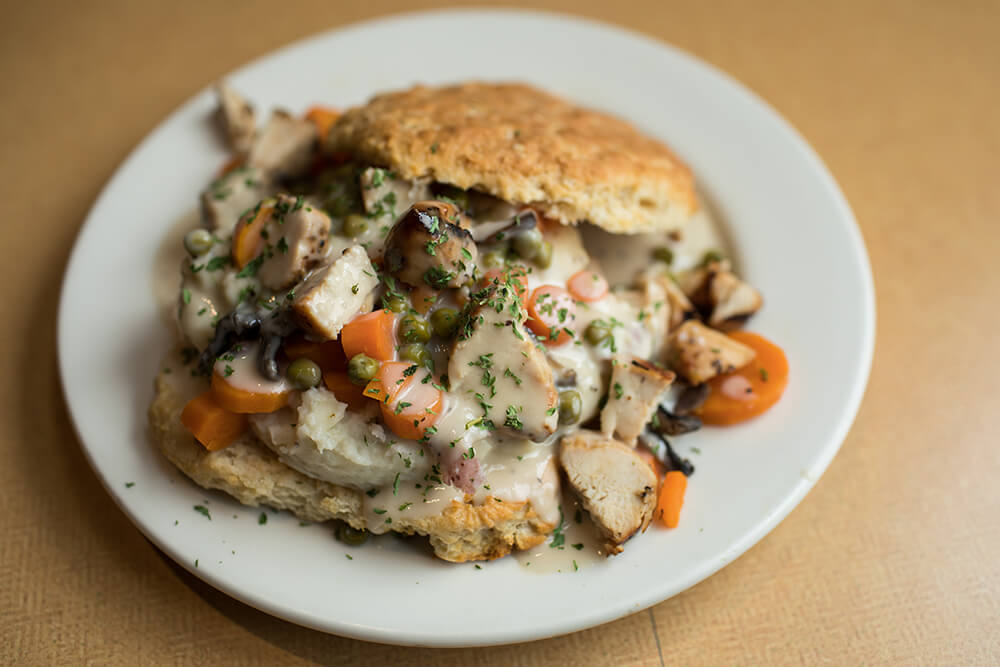 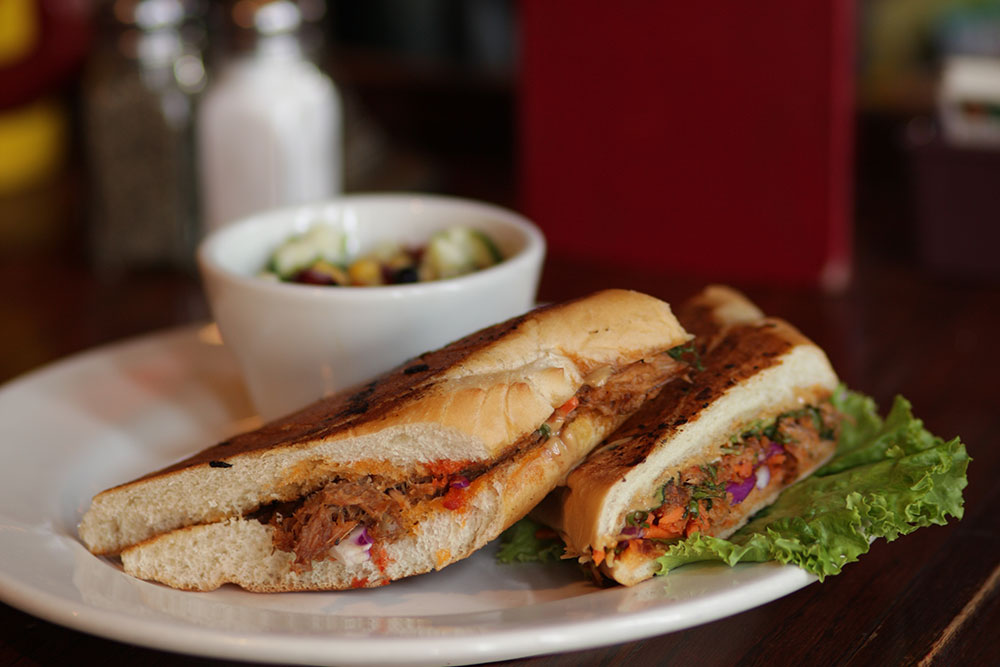 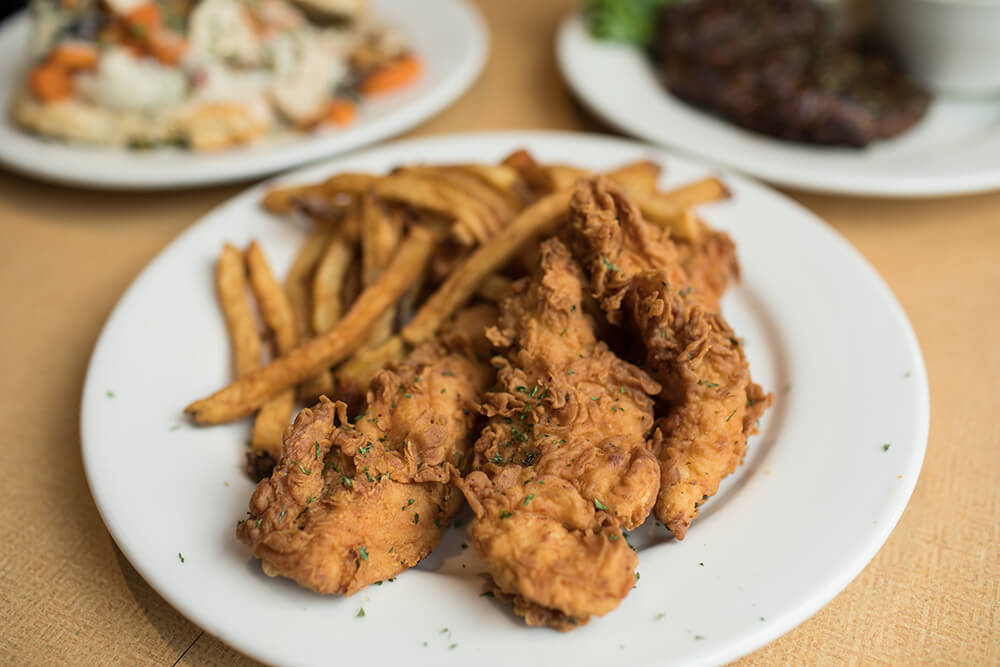 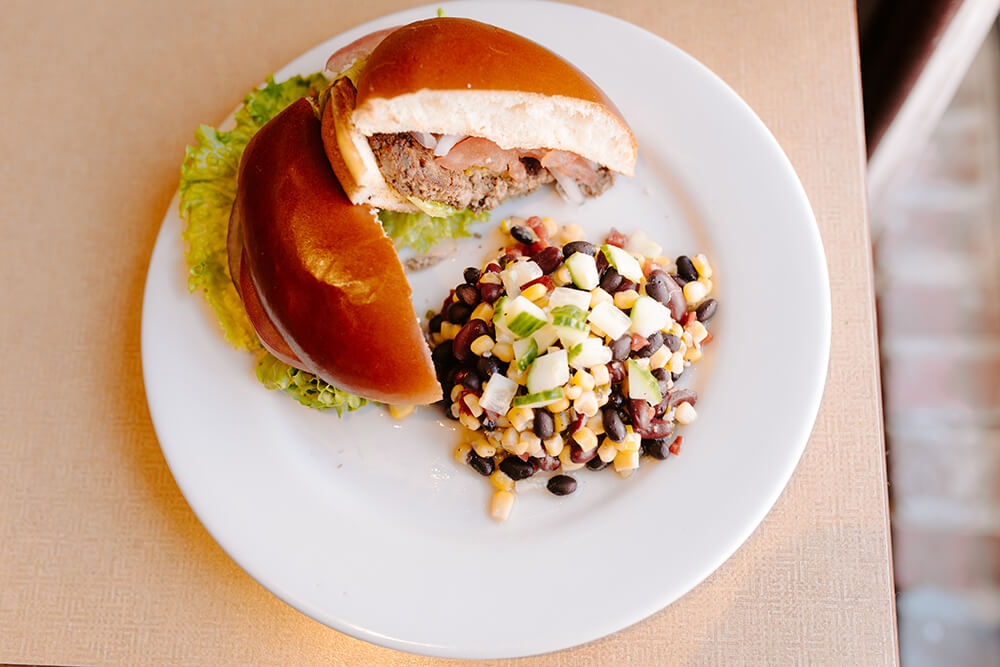 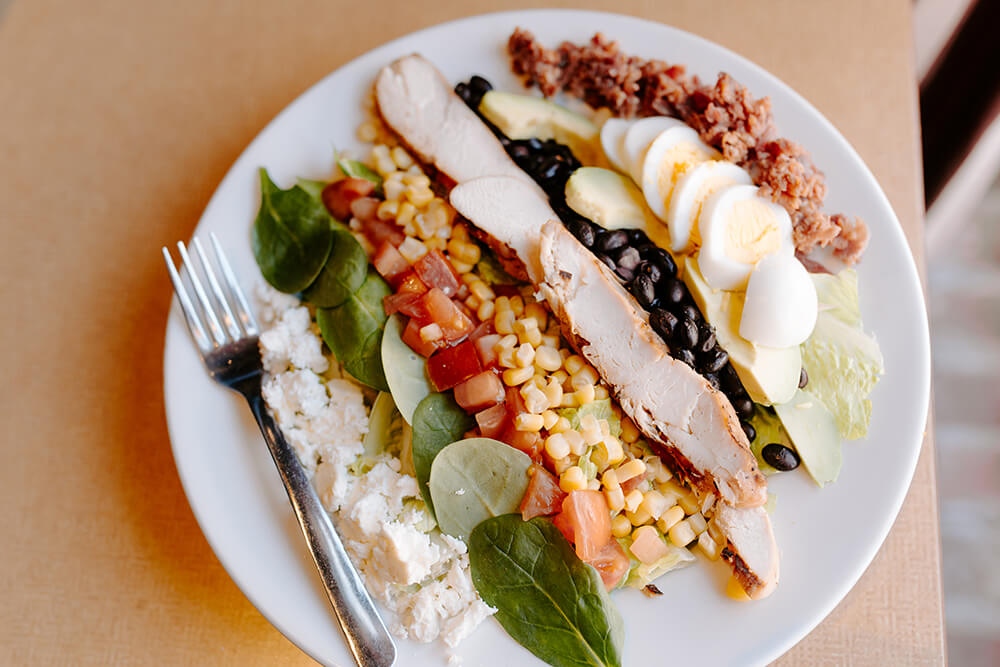